Regional construction: A piece of the action

Most people’s idea of construction activity is of London and the South-east in relatively robust health; the rest of the country dying on its feet. But in this preview of Building’s Regional Construction Trends White Paper, we find the true picture is more complex than that 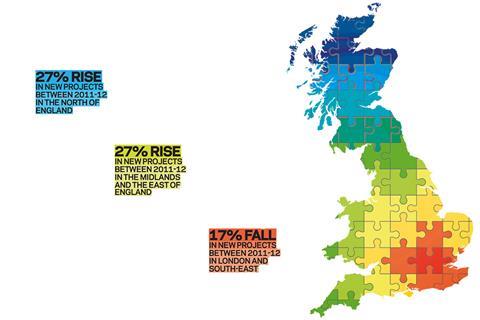 The painful contrast between the tentative signs of recovery in the wider economy, and the national picture for construction was made stark when the UK economy lifted itself out of recession in the third quarter of 2012. That quarter the construction industry shrank 2.2%, according to the Office for National Statistics - and it was the fifth consecutive quarter of shrinking output in the industry. And while the fourth quarter of last year offered some hope as the industry grew 0.9%, it is still far too early for confidence in the market.

But this continuing malaise has not been felt equally in all areas of the country, leaving firms struggling with how to respond to the changing landscape of regional work. In-depth analysis for Building’s forthcoming Regional Construction Trends White Paper, to be published this month, paints a picture of an industry that is seeing pockets of activity masked by the gloom - and a picture that is far more complex than the perception that the South-east is the only real place to be. So where are the hidden opportunities, and what trends are emerging from construction businesses in their strategies towards chasing this work?

As you would expect London and the South-east remains the UK’s busiest region with 27% more new projects than the second busiest region, the North. But you might be surprised to find out that Building’s analysis of data from Barbour ABI for the white paper found that London and the South-east experienced a 35% drop in new projects between the start of 2011 and the end of 2012.

Likewise, while it is understandable that a nationwide survey of over 900 construction professionals conducted for the white paper found that 71% expected 10% or more of their turnover in 2013 to come from the region, a significant number of respondents also expected similar levels of turnover to come from other regions. For instance, 36% of respondents to the survey said the Midlands would account for 10% of turnover.

Gordon Kew, UK director of regional building at contractor Interserve, says the higher education sector is showing a surprising amount of opportunities in the Midlands region despite the overall market in that region being “relatively flat”.

Kew’s comments are backed up by data from Barbour ABI for the white paper that shows the number of new projects in the education sector in the Midlands and East Anglia increased steadily from 66 in the first quarter of 2011 to 89 in the fourth quarter of 2012.

John Frankiewicz, chief executive of contractor Willmott Dixon, adds that the care home market is another driver of work in the region. He says recently announced government policy to give certainty over how long-term care will be paid for will continue the unlock “the grey pound”. “That market is going to grow,” he says.

Likewise, research for the white paper demonstrates that the construction market in the North promises far greater opportunities than is generally assumed. Fifty-two per cent of respondents to Building’s survey identified either the North-east or the North-west as a source of significant turnover for their business. Indeed, Frankiewicz says the region is setting the pace for Willmott Dixon’s business. The firm has already secured 80% of its national revenue for the year and orders in the North are playing a key role. Orders in the region are significantly up on where the firm had expected them to be by March 2013.

Kew adds that contractors have other reasons to be optimistic about the region. He says: “Some of the Northern Local Enterprise Partnerships [the initiative to drive regional growth which replaced Regional Development Agencies in 2010] are extremely strong and hopefully we will see some projects from that.” 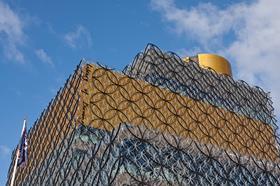 However, in general, work outside the South-east remains hard to come by and some firms have taken the decision to close regional offices. In October 2012, Building revealed contractor Morgan Sindall had decided to close five offices. The firm said the move was about “keeping its cost base as low as possible”. Likewise contractor Kier announced this month it would be closing offices as it restructures. Kier said the closures would make the business more efficient and denied that they would weaken the firm’s regional presence. The firm will stick to having eight regional arms as part of the restructure. It followed a decision by contractor Balfour Beatty to close 38 of its offices as part of a wide ranging restructure.

These firms are not alone. Sixteen per cent of respondents to Building’s survey said they had reduced the number of offices over the last year. This trend was more pronounced for contractors, with 22% of respondents saying they had seen offices close. Conversely, only 11% of architects reported office closures.

But Interserve is bucking this trend. Kew says the firm plans to expand its regional office network. “Our coverage UK wide is pretty good but there are one or two gaps we would like to fill. We are looking at opening a satellite office in one or two of those locations,” he says. He adds that the firm gets more “traction” bidding for work with regional clients when it has a local base and supply chains in place, ensuring spending benefits the local economy.

Frankiewicz, who has also avoided office closures, agrees that having close links with local suppliers helps Willmott Dixon win work. He says: “Up to 50p in the pound can be spent locally within an hour of our sites. That’s very attractive. That appeals to local authorities.”
Kew adds that supply chain members, many of which are regionally based, tend to bring new ideas to Interserve first if they have long-standing and stable relationships, in turn improving the main contractor’s service to its clients. He points to the firm’s M&E subcontractor on its Leighton hospital extension project. It recently designed a modular way to build the plant rooms for the scheme making the programme much more manageable and causing less disruption to ongoing running of the hospital.

Meanwhile, architects and engineers who have seen fees squeezed in the downturn have chosen to manage the changing picture of regional income in other ways.

Mike Walters, regional lead and managing director of the London office at architect Aedas, says the firm uses its international work to help keep its regional bases alive. “[Other architects] are looking internationally to stimulate the London business,” he says. “We are slightly different because we already have international offices and we look to use that work to stimulate the work in the regions in the UK.”
He adds that some of the firm’s regional offices have built-up specialist skills in various sectors, which can be applied to projects across the globe. For instance, he says the firm’s Leeds office has built expertise in healthcare and the Manchester office is a source of expertise on education design.

Like Aedas engineer Ramboll will send work to offices where there is staff capacity but it also moves staff to where there is work. This ensures staff are productive across its regional offices. “We see a lot of our engineers being quite mobile at the moment,” says Steve Bentley, head of building services at Ramboll. “We’ve got a lot of our engineers from our Bristol office working in Glasgow and Southampton and we’ve got guys from Manchester working in London.”

Building’s white paper analysis shows that the commonly held assumptions about the best sources for work in the UK market are not always accurate but opportunities exist in all regions if you know where to find them.

Figuring out how to adjust their business to cope with the changing regional markets will be crucial for construction firms as they wait for widespread growth to return to the country.

The north of England has had an uncertain couple of years but remains the second busiest region in the UK and so is not somewhere firms can afford to ignore. According to the data from Barbour ABI, activity over the course of 2011 was largely flat, going from 546 projects in Q1 to 530 projects in Q4. But work appeared to pick up in the first half of 2012, with the number of projects rising to 750 in the second quarter. However, this activity has since declined sharply to 603 projects in the fourth quarter of 2012.

Despite this market uncertainty, the number of residential projects in the region has risen dramatically from 541 projects in 2011 to 842 for the whole of 2012. The value of new residential orders has also grown from £4.7bn in 2011 to £7.5bn in 2012 according to data from Barbour ABI. This all comes despite a continued stagnation of house prices in the region. The Land Registry’s House Price Index shows the price of houses in the North-east rose only 0.3% between December 2011 and December 2012. Prices in Yorkshire and Humber fell 0.7% over the period and prices in the North-west plummeted 3.5%.

Meanwhile, the civils sector continues to be the second biggest in the region. It was boosted by contracts for the multibillion-pound Hornsea wind farm in the first quarter of 2011 pushing new orders to a total of £15.6bn in the quarter. This was then followed by a further £7.8bn of work across the sector over the next seven quarters.

The leisure sector also continues to be a major source of work in the North. The region has the second biggest leisure sector in the country, not far behind London and the South-east. The region saw £657m of new orders over the last two years compared with £758m in and around the capital. Together the two regions accounted for 77% of all leisure works contracts in the UK.

The North also has the second largest value from education contracts, after London and the South-east, partly driven by the fresh investment under the priority schools programme. It is also the second largest region for the hotel sector racking up contract awards valued at £1.1bn over the last two years. 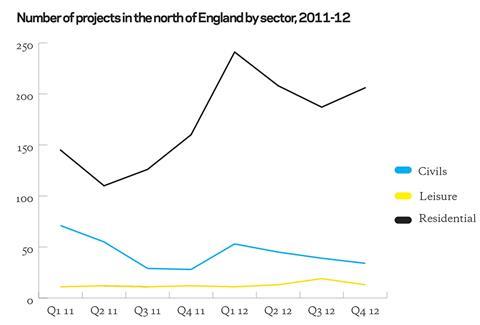 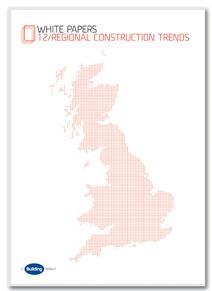 Building’s Regional Construction White Paper is based on data from Barbour ABI, a survey of over 950 construction professionals and construction clients. It includes:

To pre-order a copy of the Regional Construction Trends White Paper go to www.building.co.uk/regionaltrends