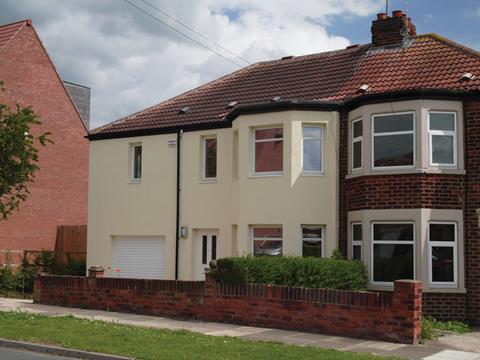 How happy would you be if you went through the expense and disruption of improving the energy efficiency of your home, only to find your bills dropped far less than expected?

There is already a growing body of evidence that points to a yawning chasm between the theoretical and actual energy performance of new homes. This so-called performance gap can be huge - in some cases, up to three times more energy is needed to keep a new house warm than the original design prediction.

Until now no one has posed the same question of retrofits. This issue is fundamental to the success of the Green Deal, as the loan used to fund energy efficiency improvements is paid back through savings on bills. If improvements don’t deliver as promised, householders will be stuck paying back interest on a loan for much longer than expected.

Now performance gap experts the Joseph Rowntree Housing Trust (JRHT) and Leeds Metropolitan University have provided an answer. They have pioneered the co-heating test, a procedure that scientifically establishes exactly how much heat is being lost from a building without the vagaries of differing occupancy patterns. The test was first applied to a new-build JRHT scheme at Elm Tree Mews in York and revealed that carbon emissions were up to 140% higher than the design prediction. This prompted regulations minister Andrew Stunell to propose that, from 2013, housebuilders should become quality accredited and follow a common design and construction specification when building new homes or face a 3% higher carbon reduction target.

But would the test show similar causes for concern in retrofits? JRHT undertook the refurbishment of a thirties semi-detached home at 67 Temple Avenue, down the road from Elm Tree Mews, to find out, comparing the predicted measurements taken from the SAP Part L compliance tool with the actual heat loss determined by the co-heating test.

The experiment involved three stages. First the house’s energy performance in its unimproved state was evaluated using both SAP and the co-heating test. Then, a standard set of energy efficiency improvements was carried out, including cavity wall and loft insulation. Again, SAP was used to calculate theoretical energy improvements, while the co-heating test was used post-completion to establish actual heat loss.

Finally, a radical retrofit was carried out to bring the house up to the same standards of energy efficiency as a new-build, Code for Sustainable Homes level 4 home, with before-and-after energy performance measured once more.

The house before improvement

The house is two storeys tall with a large extension to the side and rear. The original home had uninsulated cavity walls and the extension has 25mm of insulation within the cavities. The main roofspace and rear extension contained 75mm of degraded insulation, with 150mm of insulation over the garage. The floors were uninsulated and the central heating boiler was located outside the house. 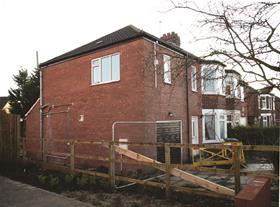 The home is losing less heat through the fabric than predicted by SAP, which has implications for the Green Deal. This could mean the savings on bills wouldn’t be as great as predicted, extending the payback period. This house was evaluated by experts using the full version of SAP rather than a simplified version, RDSAP, which will be used by Green Deal assessors in a modified form. These are unlikely to have the same degree of training as low energy specialist Richards Partington Architects (RPA), which did the calculations so the predicted heat loss could be even less accurate.

David Adams, head of retrofit at contractor Willmott Dixon, says the Green Deal version of RDSAP will need to be carefully developed. “Further work needs to be done to develop RDSAP to ensure it can take more sophisticated inputs and the person doing the assessment really knows their stuff,” he says.

Both Adams and Richard Partington, director of RPA, say it is very difficult to determine precisely how a home has been constructed, which makes entering the right information into SAP a challenge. “Not all thirties houses are the same,” says Partington. “The construction may be similar but there have been so many modifications and extensions added that very few are actually the same.”

The standard improvements were typical energy-saving measures likely to be implemented under the Green Deal. These were carried out by the type of approved contractors likely to be used by householders. The measures included blown-in cavity wall insulation with the tops of the cavities packed with insulation to stop thermal bypass, a condition whereby warm air rises through cavities, causing heat loss. The loft was topped up with 400mm of insulation, and 75mm of rigid insulation was fixed to the wall that separates the house from the garage. The chimneys were blocked and insulated, services penetrations through external walls were sealed, the timber floor at ground level was covered with hardboard and the joints taped. The boiler was moved inside the house.

Cost of the measures

A co-heating test revealed the standard retrofit delivered only 73% of the predicted performance improvement. Forensic examination was undertaken to find out why: borescopes were used to peer inside walls and heat flux measurements and thermal imaging revealed where heat loss was the greatest. The roof perimeter was also removed, ready for the radical retrofit.

These investigations revealed that the cavity wall insulation spread was hindered by debris inside the cavity, including bird’s nests, and the lack of a cavity barrier between the house next door meant the insulation was falling into the neighbour’s cavity.

The roof insulation stopped short of the eaves and the insulation packing needed to stop thermal bypass was missing. “These investigations showed that the measures didn’t work properly,” says Partington. “These were put in by reputable installers who met all the guidelines.” 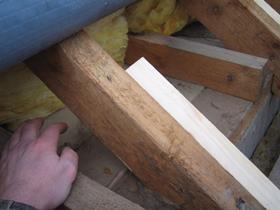 The roofspace insulation stopped short at the eaves

The radical retrofit was intended to bring the house up to the same standard as a new-build, low-energy housing scheme being developed by JRHT in the same road. Most of these measures are beyond the scope of what the Green Deal is intended to achieve but will be necessary before 2050 if the UK is to meet its 80% carbon reduction target.

Some 175mm of external wall insulation was added to the home, which meant extending the eaves and rerouting external pipework. High-performance triple glazing was installed, as were insulated external doors. Mechanical ventilation with heat recovery (MVHR) was put in and airtightness improved. The concrete floor in the extension was broken up and the original timber floors ripped out and replaced with an insulated concrete floor - a disruptive process. Finally, solar thermal panels were put on the roof.

Cost of the measures

What does this mean for the Green Deal?

The underperformance of the measures will impact negatively on the payback period for the improvements, which means householders will pay more in interest (see table, below). The government has realised this and on 12 June published so-called “in-use” factors that build an allowance for underperforming energy efficiency measures.

The measures available under the Green Deal have been assessed for likely in-use performance and these figures will be used to calculate the savings, and whether the measure meets the golden rule which states that savings on bills must exceed the cost of the measures within a 25-year period. Cavity wall and loft insulation has an in-use factor of 35%, internal and external solid wall insulation 25%, floor insulation 15% and double glazing 15%.

Willmott Dixon’s Adams welcomes the in-use factors. He says. “We assume you get the same performance from products when used in real life as in the test lab because these are installed perfectly. The fact that you don’t achieve the perfect state is only to be expected - to get 75% of the expected performance is pretty good.”

The results of the Temple Avenue experiment make depressing reading for Richard Partingdon. He says: “If we are trying to get an 80% reduction in carbon emissions by 2050 but are only getting 70% of the predicted savings how on earth are we going to hit the target?” 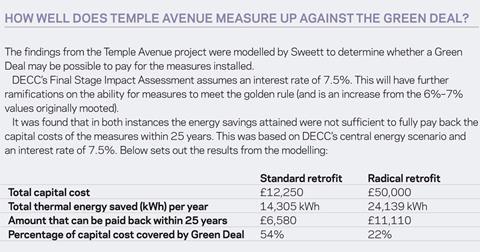 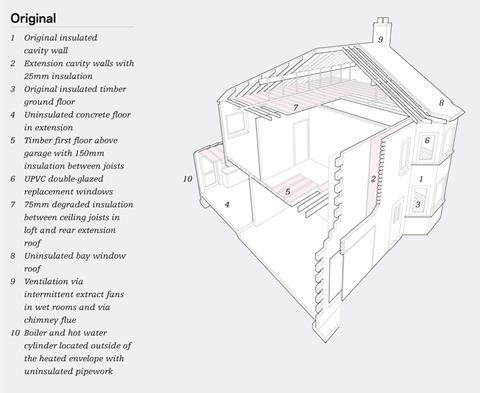 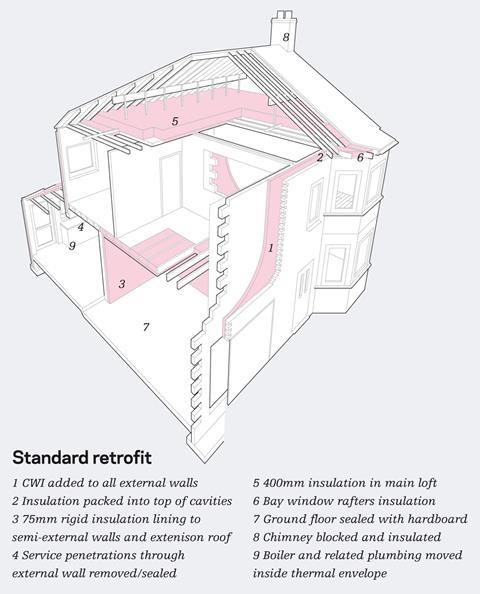 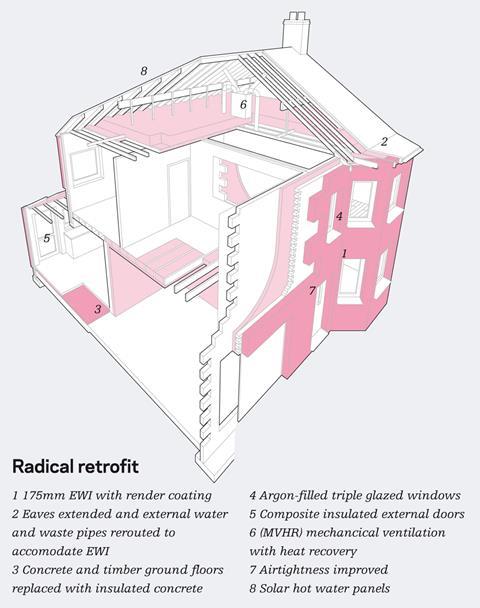