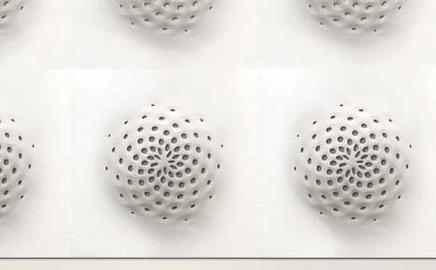 They are made the company’s Corian material, which is composed of acrylic polymer and alumina trihydrate. The series has patterns inspired by the work of mathematicians such as Fibonacci, Gauss, Moiré, Fourier and Voronoi. These come in 2,400 x 700mm panels; there are also phyllotaxis panels (named after the botanical term for the arrangements of leaves), which measures 700 x 700mm. The panels pictured show the golden spiral found in sunflowers and pineapples, which is related to the Fibonacci sequence. The collection will include further series of 3D patterns. The technology also enables architects and designers to specify customised patterns.