6
The man with the toughest job in construction
Focus

The man with the toughest job in construction 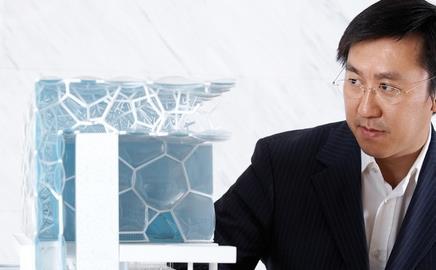 So what’s it like having most of the weight of the Beijing Olympics resting delicately on your shoulders? Stuart Macdonald asked Arup’s Michael Kwok, who ought to know

Michael Kwok did not come across as a man carrying the hopes of 1.3 billion people on his shoulders. He was calm, self-assured and measured when we met in his 39th floor office, overlooking the polluted afternoon Shanghai murk.

Yet, more than almost anyone else, this unassuming 40-something is responsible for making sure that the Beijing Olympic Games is a success. Quite a feat for a structural engineer who only set up Arup’s business in Beijing seven years ago.

“Yes, it is true,” he says, tucking into a chicken sandwich in his office. “I was the project director responsible for Beijing airport’s Terminal 3, the Water Cube, the stadium and CCTV Tower, so it was my name on the contracts. If the Games venues were delayed, I would be to blame.” He reels these names off as many engineers would when discussing past and rather mundane projects, rather than the four buildings that will be as much an image of the Beijing Games as the Forbidden City or the nearby Great Wall are for China as a whole.

Tristram Carfrae, a longtime colleague who is based in Melbourne, says that this nonchalance is just Kwok’s quiet way but that, much like the jaw-dropping buildings he brings to life, he has a steely core. “Michael is our man in China,” says Carfrae. “He is a fantastic strategic thinker who opened up China for Arup. His ambition for Arup in China is exactly what it should be. Not just the Arup tradition of flashy structures – he is also keen on looking at specifically Chinese issues, such as urbanisation.”

Carfrae – the project director for the Water Cube (see box, page 46) – admits that when he and Kwok attended a leadership course in 2001 “one of the goals we set ourselves was to win a large number of projects for the Beijing Olympics. We didn’t do too badly!”

It was no fluke that Kwok, an Arup veteran of 22 years, achieved such staggering success for his company. Perhaps sensing my earlier incredulity, he becomes slightly more animated, saying: “Looking back it’s a dream come true. When I set up the Beijing office in 2001 the city had yet to win the Games – this was announced in July 2001. We thought that after China was admitted to the World Trade Organisation in 2001 Beijing was the logical place to capitalise on the huge investment from this. Once we started bidding, things started coming from all directions.

“It is quite unprecedented for one firm to have so much responsibility for the Games. An engineer such as myself would perhaps dream of doing one of these projects in a lifetime, but doing so many is unbelievable.”

Rather than dwell on the pressure he and his international team were now under to ensure that the Beijing Games venues and supporting infrastructure were ready on time, Kwok threw himself into working on the stadium, or Bird’s Nest as it is universally known. “Herzog & de Meuron was inspired by Chinese artwork and some of the cracked glaze you get on pottery in China,” he says, “When I first saw the building design I was very touched by it as it was different from any stadium I’d seen before. But the engineer in me was thinking, ‘How on earth are we going to support that?’

If you look at it purely as a stadium, then yes there’s too much steel. But this is much more than just a stadium

“The solution we came up with was relatively conventional in the end. It was a base structure, overlaid with a number of other pieces of steel to create the random effect. Quite a clever and delicate process, but based on quite a simple basic framework.”

It sounds straightforward enough when he explains it in the quiet of his office, surrounded by models of the buildings Arup is responsible for in China, but it was anything but that in practice. Factor in 60-tonne, 100mm-thick steel plates to absorb the huge forces of such a scatterbrained structure, a sophisticated computer program to ensure the mess of jutting steel resolved itself into smooth curves when viewed from a distance, and rows with Chinese contractors who had never done anything like this before, and the scale of the challenge becomes clear.

Then, just when Kwok thought they had finally nailed it, disaster struck. “In 2004 there was an instruction from above that the stadium’s budget needed to be cut. There was a feeling that the Olympic stadium and the Water Cube were costing too much: RMB3.2bn (£240m) for stadium; RMB1.1bn (£81m) for the Water Cube. When this order came we became very worried, but we did some studies and decided the simplest way to save money was to remove the [retractable] roof. We were already on site doing foundations then and had all but finished our design work. It meant we almost had to go back to the beginning. We made the roof opening larger and removed a lot of the steel – cut 20% to 42,000 tonnes of steel – which cut the cost by 10%.”

Although this delayed the project by six months it meant the cost was now about RMB2.6bn [£190m] and, just as importantly as far as Kwok was concerned, “the final building was still the same Bird’s Nest that the client has chosen”. The client here being a development consortium led by contractors CITIC and Beijing Urban Construction. “You would normally expect it to be changed a bit anyway, as people say, ‘It looks good but it would be easier and cheaper to build it this way’. This created intellectual problems as what we were doing was very different to anything that had been done before.”

It is this intellectual legacy that Kwok is perhaps most proud. He says: “It is one of the favourite projects of my career. For it to look so crazy on paper, and to be built and loved by so many people is very satisfying. Lots of new ground was broken in doing these projects. We were really pushed and were pushing people out of their comfort zone – the stadium, the Water Cube and CCTV. I think doing these has created a strong intellectual base in China that will stand it in good stead as there are no such projects being done anywhere else in the world.”

This may be true, but it is unlikely that the main Olympic venues would have even seen the light of day in London as there are unanswered questions over their use after the Games. A source familiar with the contracts for the Beijing venues said: “The legacy? I am not sure the developers know themselves what this will be. They cannot be looking at these as an economic investment as they will not get their money back. However, the stadiums will remain despite this, with the Olympic Village being turned into flats for sale.”

There has also been criticism that the Bird’s Nest’s use of steel is profligate. For the first time in our conversation Kwok grows defensive. “If you look at it purely as a stadium, then yes there’s too much steel. But this is much more than just a stadium – it’s an icon for the city and a place people will want to visit long after the Games. I think it is definitely worth it and money well spent.”

It is something of an academic point now as the Olympic green and its arresting stadiums to the north of the Forbidden City are now ready, bar some frantic last-minute landscaping. So is the man who has done so much to help bring Beijing to this stage looking forward to relaxing in one of his venues to watch the Games unfold? “I hope to be able to go to some events at the Games. I’m not sure whether I’ll get any tickets or not though yet!”