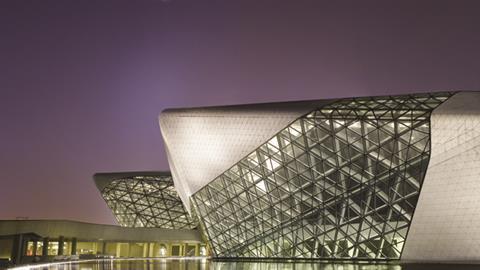 Zaha Hadid’s £65m Guangzhou Opera House has officially opened. The 1,800 seat, 70,000m2 theatre is the largest performing arts venue in south China and the third largest theatre in the country. Situated on the banks of the Pearl River, the theatre’s twin low-lying boulder-like structures act as a gateway to the city’s cultural quarter and contrast sharply with the soaring skyscrapers of Guangzhou Zhujiang’s financial district beyond.

The design concept evolves from two pebbles lying in a stream whose surfaces have been smoothed by erosion - a synthesis of architecture and geology. The multiple folds and indentations visible on the interior of the opera house relate to the grooved terrain of a natural landscape serrated by water. Externally its bulbous shape, smooth concrete surfaces and glazed incisions all forcefully evoke the natural topography of boulders, canyons and valleys improbably stranded in an urban setting and yet inexorably linked to the passage of water.

The theme of natural landscape is amplified in the theatre’s interiors. Plunging lobbies charge chaotically through the building footprint like sunken gorges cut into a valley. Ramps and staircases twist and wind determinedly up walls like paths wrapped around a rock face. Walls and ceilings are brutally lacerated with parallel lines that distort perspective and lead the eye to absent vanishing points on artificial horizons. And natural light is admitted throughout by glass cages composed of an irregular, asymmetrical diagrid. Everywhere, the fluidity, movement and spatial disorientation of natural landscapes is recreated in artificial, man-made form.

But it is the main auditorium that makes the most visceral conceptual statement. Completely covered in gold-coloured acrylic panels and punctuated with thousands of spotlights, it glimmers like a precious metallic constellation or a giant, mutated musical instrument that has been cast into outer space. The effect is undeniably decadent and debauched, a breathless, precocious assault on the senses that is as contrived and operatic as the performances it is destined to host.

And yet, for all its manufactured artifice, it is here that Hadid has achieved the most organic element of the entire building. For with its sweeping curves and ergonomically ribbed surfaces the main auditorium appears like a gilded embryo encrusted deep within a jagged concrete womb.

The printed version of this article contained incorrect information about the project team, we apologise for any misunderstanding caused.