Lots of people feel they’re doing very well at the moment: this year’s Serpentine Pavilion has its run extended, Westfield has an impressive new roof and Bovis Homes says it has incontrovertible proof of satisfied customers

Straight from the PR team’s mouth

I’m pleased to report some good news about Bovis Homes. The firm hit the headlines earlier this year when it was forced to set aside £10m to appease some customers fed up with the bodged jobs they discovered when handed the keys to their houses. New boss Greg Fitzgerald promptly sent most of his staff on customer training programmes. The new broom seems to be sweeping clean, according to satisfied Bovis customer Helen from Cheltenham, who (I am told) had her doubts about new-builds. Such has been the fantastic customer service she got from Bovis, she has totally changed her mind about them. And who was the conveyor of this great news? The Bovis Homes press office, of course.

The vast majority of construction industry firms take staff health and safety very seriously. But some appear to take it more seriously than others. Take SMD, a Poole-based steel decking firm that eschews subcontractors, preferring to directly employ site workers. To look after their welfare, it books hotel accommodation for employees working away from home. This, while a pricey strategy, ensures workers are – in the words of SMD’s business development director Dan Williams – “fully alert, refreshed and 100% fit for work”. A commendable idea, although one hopes they haven’t spent the night before in the hotel bar.

We’re playing our part in a new show at the RIBA, home of the great and the good in British architecture. The exhibition at 66 Portland Place – called Pablo Bronstein: Conservatism, or The Long Reign of Pseudo-Georgian Architecture – showcases drawings by the British-Argentinian artist and focuses on buildings from the second half of the 20th century. It includes articles and adverts taken from Building between 1975 and 2002. Apparently there was a long-running discussion in our pages during that time on the pseudo-Georgian in British construction, but I must confess it rather passed me by. I’m more of a brutalist man, myself.

This year’s Serpentine Pavilion, designed by Burkina Faso architect Diébédo Francis Kéré, is to remain open to the public for an additional six weeks until 19 November, in response to “public demand”. It’s the first time a pavilion has had its opening time extended in the annual structure’s history. According to Aecom, which has provided technical support to the last five pavilions, Kéré’s structure “reflected the architect’s vision of community and connecting people together with nature, through the exposed canopy structure and the use of tactile traditional materials – steel, timber, concrete and polycarbonate”. Whatever else it does, I feel it beats many of its predecessors, not least Herzog & de Meuron and Ai Weiwei’s bizarre “floating lake” effort in 2012.

Training to be top

Last week saw the largest freight train ever to leave south Wales bound for London carrying 2,300 tonnes of limestone. Operated by DB Cargo UK, the train comprised 34 wagons and was 660m long. Sounds impressive, doesn’t it? But some research made our effort in the UK look a bit second-rate. In the US, freight trains can stretch up to 3.7km long. In Canada, they are even bigger, stretching to 4.2km. But the longest freight train of all was run by mining behemoth BHP Billiton. Carrying iron ore across Australia, it consisted of 682 wagons and ran to a whopping 7.3km in length. And it ran on time. Southern Rail, please take note. 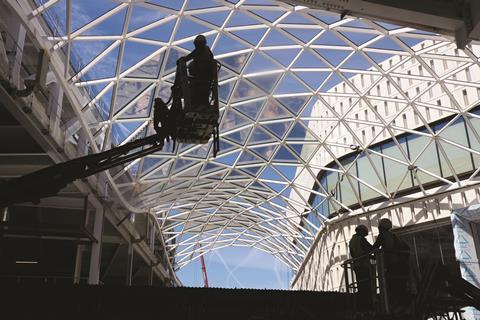 When I first heard about the wiggly glass “organic free-form” roof covering Westfield London’s £600m expansion of its shopping centre in Shepherd’s Bush, I thought somebody had taken leave of their senses. What could be organic about this steel and glass roof, I asked. But then I was informed that the “fully organic node system” I was spluttering over actually referred to how the individual elements have been stuck together to create the wiggly roof (pictured). Of course! As it goes, the roof’s stats are impressive: 40,900ft2, or an area the size of 19.5 tennis courts, and weighing in at 197.5 tonnes, or pretty much the same as a fully grown blue whale.