The economy has lost some momentum since the summer’s Brexit vote, but is doing better than analysts had forecast. Michael Dall discusses the highlights of Barbour ABI’s monthly Economic & Construction Market Review 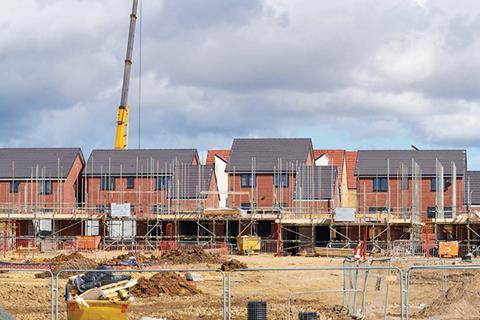 This was below the 0.7% rate of growth experienced in the second quarter of 2016 and is an indication that, while the economy has lost some momentum over the summer months, it is performing better than most analysts expected in the wake of the Brexit vote.

The labour market continues to perform particularly strongly in the UK; however, there were further falls in the period from August to October.

The rate of unemployment is currently 4.8% for people aged 16 and over, down from 4.9% in the three months to September 2016. The levels of unemployment are at the lowest point in 11 years, according to the Office for National Statistics.

October witnessed an increase in construction levels, with the value of new contracts awarded £5.9bn, based on a three month rolling average

The rate of inflation fell to 0.9% in October, with the continued decline in clothing and food prices the main reason for this. Most commentators expect inflation to start growing next year as the impact of the weaker pound starts to affect the price of imported goods.

The construction sector continues to show signs of resilience despite tougher economic headwinds, with output steady and contract awards increasing.

The latest figures from the Office for National Statistics indicate the construction sector in the UK declined by 1.1% between Q2 and Q3 in 2016.

Comparing Q3 output levels with the same period in 2015 showed an increase of 0.1%, demonstrating an industry that is roughly the same size as it was last year despite the slowdown in recent months.

There were quarterly decreases in new private housing but this was still 10.8% higher than in the corresponding time period in 2015. There was also a quarter-on-quarter decrease in private commercial output but this was also higher than the same quarter in 2015. The one sector that showed declines in both comparison periods was industrial, which declined by 1.2% over the quarter and 12.3% on the same quarter in 2015. On a positive note, infrastructure increased by 1.2% but is 7.7% below the figure of last year.

The CPA/Barbour ABI Index, which measures the level of contracts awarded using January 2010 as its base month, recorded a reading of 144 for October. This is an increase from the previous month’s figure of 142 and suggests that activity in the industry is increasing after an initial decline following the EU referendum result. The readings for private housing improved to register a reading of 243, up from 227 the previous month. Commercial offices recovered some of last month’s losses with a reading of 93, up from 84 in September. However, that compares with a reading of 155 in October 2015.

According to Barbour ABI data on all contract activity, October witnessed an increase in construction levels, with the value of new contracts awarded £5.9bn, based on a three month rolling average. This is a 5.9% increase from September but is 18.3% lower than the value recorded in October 2015. The number of construction projects within the UK increased by 3.3% in October, but this was 20.5% lower than in October 2015.

The majority of the contracts awarded in October by value were in London, accounting for 22% of the UK total. The North-west had the second highest, with 14% of contract award value. The main reason for London’s figures this month was the award of two major residential schemes at Chrisp Street in Poplar and in Kidbrooke Village. The Chrisp Street development is a mixed-use scheme set to deliver 692 units being built by Telford Homes at a value of £300m; Kidbrooke Village is phase 4 of a development and is valued at £126m.

Residential had the highest proportion of contracts awarded by value in October, with 58% of the total. This is followed by the commercial and retail sector, which accounted for 12% of the awarded value.

The two above-mentioned contracts are the main reasons for the residential sector’s strong showing in October and confirms the continued confidence among housebuilders, which shows no sign of slowing in the wake of the Brexit vote. 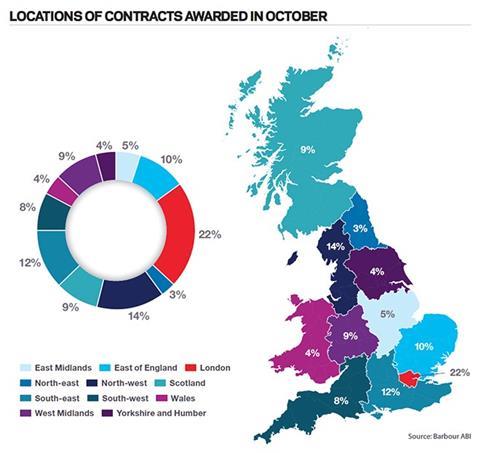 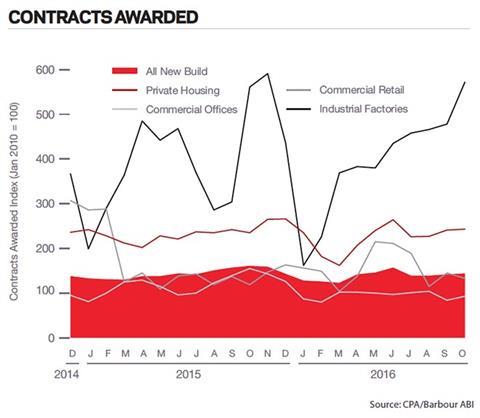 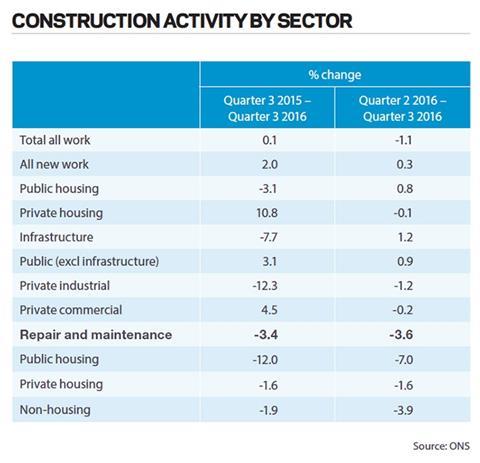 The value of contracts awarded increased significantly in October. Performance was exceptionally strong, with the total value of projects awarded valued at £2.3bn based on a three month rolling average. This is a 33.5% increase on September and 5.7% higher than in October 2015.

The number of units within the contracts increased by 9.3% between September and October based on a three-month rolling average, 4.2% higher than in October last year, suggesting a continuing recovery.

Nationwide’s October indices show that average house prices are rising at 4.6% annually, down from 5.3% in September. Market conditions are described as “stable” and the relative strength of the labour market should continue to underpin these levels of increases.

The Halifax reported annual house price rises at 5.2% in October, down from 5.8% in September. Taylor Wimpey said its order book had grown since last year despite it selling slightly fewer homes in the past year. At the same time, Persimmon reported a sales rates increase of 19% in its trading update.

London is the main location of activity, accounting for 28% of contracts value awarded, an increase of 12.6% on October 2015. The North-west had the next highest of contract award value, with 15.2% of total value, a rise of 0.5%. 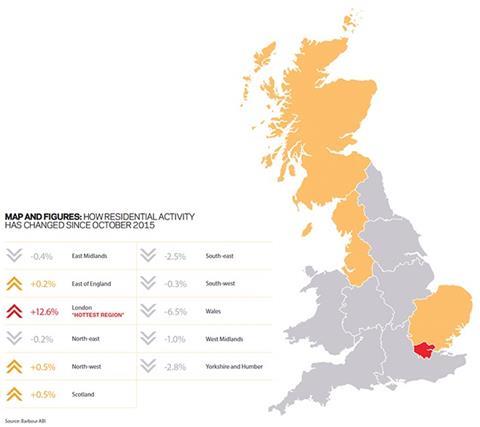 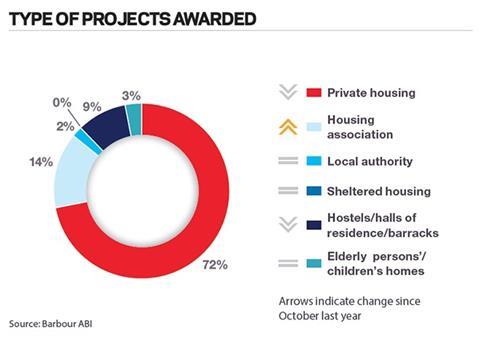 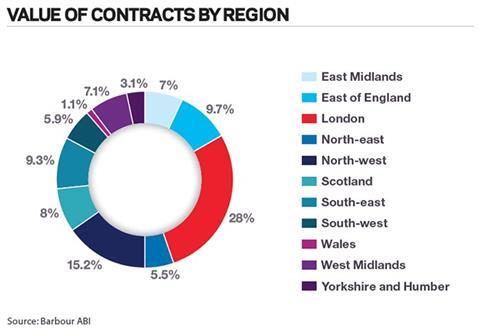 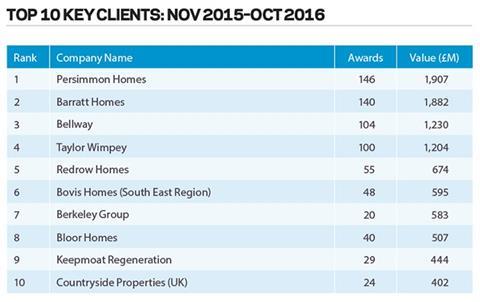 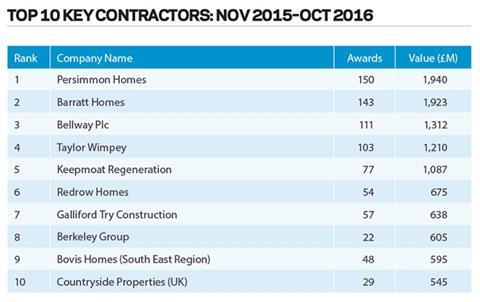