All bridges in Cumbria to be safety checked 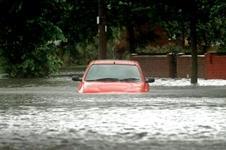 Safety inspections of 1,800 bridges being carried out in flood-hit region after collapse of six crossings

A safety review of all 1,800 bridges in Cumbria was under way over the weekend following the collapse of six crossings in the wake of severe flooding in the region.

The inspections come as flood warnings remain in force in 22 areas of the UK: six in Scotland, 10 in north-west England and two in the Midlands.

The Environment Agency has also warned that many of the 1300 Cumbrian homes flooded by record rainfall last Thursday and Friday may not be structurally sound and the damage will have to be assessed before people can return to their houses.

Cockermouth town centre has been cordoned off as engineers and surveyors examine the fallout of what has been described as a “once in a millennium” event.

Eighteen schools and dozens of roads are closed in Cumbria, where a policeman died after a bridge was swept away in the deluge. A search is also under way in Powys, Wales, where a woman was swept along the River Usk on Saturday.