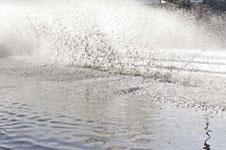 The south west of England was on alert this weekend as the Met Office issued severe weather warnings and 25 rivers in the region were put on the Environment Agency’s “flood watch” list.

The extreme weather hit the region just a week after floods battered much of Cumbria, causing damage to thousands of homes and destroying at least six bridges.

In Devon, flash floods caused water levels in some parts to rise by as much as four feet and people had to be rescued from cars stuck in floodwaters. A 60-year-old woman died in Cornwall after falling into a river.

Weather forecasters have warned that plunging temperatures and snow may hamper the recovery effort in Cumbria, where the army is working to replace bridges swept away in last week’s torrential rain.