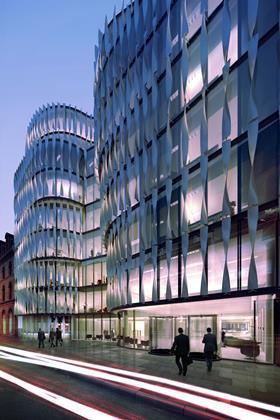 Contractor Balfour Beatty has picked up two mechanical and electrical jobs from Airedale Mechanical & Electrical after the sub-contractor fell into administration this week.

The contracting giant will take over managing Airedale’s subbies for a £10m M&E contract for 60 Holborn Viaduct, a £65m London office development (pictured).

Plus, the contractor has taken over M&E work on the £15m Ormiston Park academy school in Thurrock, Essex, where Airedale was the preferred bidder.

On both projects Airedale had yet to start work on site at the time of going into administration.

KPMG confirmed today that 135 jobs have been lost at the collapsed specialist contractor Airedale.

The £66m-turnover Leeds-based firm is the largest building services firm to fall into administration since MJN Colston collapsed in February.

The firm, established in 1984, has worked with contractors Wates, Willmott Dixon and Galliford Try in recent months.

KPMG, which was  appointed  administrators on 16 July 2012, said Airedale had “experienced a difficult trading environment in the last 18 months”.

“A sale of the business was not feasible so after entering administration it ceased to trade and its 135 employees were made redundant,” the administrator said.

The firm had previously completed work across the education, health, office and leisure sectors, including the heating, ventilation and electrics for the Olympics handball arena.

The specialist mechanical and electrical sector has been hit hard by the downturn, with most of the major contractors making roles redundant.

Building reported in May that Laing O’Rourke subsidiary Crown House, Balfour Beatty Engineering Services (BBES) and NG Bailey had plans to get rid of up to 120 workers’ jobs.

Airedale International Air Conditioning - also based in Leeds - has no association with Airedale Mechanical & Electrical and continues to trade normally.