Contractor to build one primary and two secondary schools near Manchester 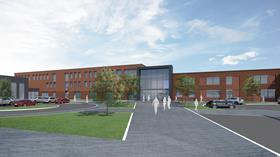 Bam has won a contract worth more than £40m to build three new schools just south of Manchester.

Work has started on the schools in Cheadle Hulme. The scheme is due to complete in February 2019 but the schools will be open from next September.

IBI is the architect here, while Mott MacDonald will provide civil and structural engineering services, Ramboll the building services engineering, and Spacezero the interiors and fixtures, fittings and furniture.

Bam is currently working on the design for Didsbury High School, which will be a brand new high school and sixth form for 1,350 students. This still requires planning permission, with the design team working on the application to be submitted before Christmas.

If this is accepted, work will start on site next May, with the new school due to open in September 2019. Both dates are subject to planning approval being achieved and a full contractual appointment being made.

The team here again includes Ramboll and Spacezero. The architect is Pozzoni, Daily Henderson is providing landscaping and Mace technical advice for both schemes.

Bam is also working with the ESFA to develop the initial proposals for the Laurus Ryecroft school in Tameside, which will encompass a 1,350 place secondary school and sixth form. The contractor has partnered with the same design team as for Laurus Didsbury.

Ian Fleming, regional director at Bam, said: “Education is a key market for BAM. Our track record is excellent, and our highly collaborative approach works well for schools.”

These are the latest in a flurry of academic wins for Bam. Last week it said it had started work on an £18m deal to build two schools in Glasgow and just days before, revealed it had beat off competition from Wates and Morgan Sindall to score a £42m job from City, University of London to build their new law school.

Last month, Bam was also appointed to both high value lots in the north and south for projects over £12m for the new ESFA national education framework running from 2017 to 2021.