Reputation of housebuilders tarnished by generous bonus scheme that is ‘not the norm’, admits David Thomas 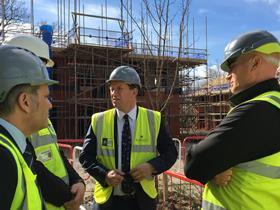 The head of the country’s biggest housebuilder has said Persimmon’s decision to pay its executives eye-watering bonuses has saddled the industry with a reputation it pays its bosses too much.

Barratt chief executive David Thomas said the controversial bonus scheme, introduced in 2012, was “not the norm” and meant the industry was now having to fight off a perception its executives were netting excessive pay packets.

Thomas (pictured, middle) told Building: “What you’ve seen is everyone getting dragged into it simply because it’s about housebuilders being paid too much money, so I think that reputationally it’s problematic for the industry, unquestionably.”

Thomas is the latest voice to criticise the scheme, which is set to dominate the agenda next Wednesday at Persimmon’s AGM, being held at York racecourse.

Thomas, who Barratt’s latest annual report shows picked up £3.3m in 2016, said Persimmon blundered by failing to reset its shares-based bonus scheme, which came in a year before the coalition government introduced Help to Buy to encourage building and assist first-time buyers onto the property ladder, fuelling the share prices of major housebuilders.

He added that Persimmon had also caused ire in the industry because of who had actually picked up the millions.

He said: “The housebuilding industry has been characterised by executives being quite well paid and that has largely been through the owner-manager structure. So you’ve seen that through Berkeley Group, you’ve seen that through Redrow. And I think that a big point of issue that people had in terms of Persimmon is it wasn’t an owner-manager, it was simply [a] professional manager receiving that amount of remuneration.”

Persimmon chairman Nicholas Wrigley and remuneration committee chairman Jonathan Davie resigned in December after acknowledging they should have capped the maximum bonus.

Thomas said: “A remuneration committee is there to set the benchmarks against other housebuilders, other FTSE 100 companies, and [it] has got to continually challenge itself against those benchmarks.”

Some suggested Help to Buy had been partly to blame for the growth of bonuses. Former head of the civil service and past chief executive of the Homes and Communities Agency, Lord Kerslake, told Building in January the initiative would need reforming if housebuilding executives continued to be seen personally profiting from it.

In February, Persimmon said it was cutting the bonuses it would award in the future because of the furore. Fairburn has agreed to hand back £30m of his potential bonus.