Housebuilder says it will have bought enough sites to build 4,000 more homes in Scotland by end of year 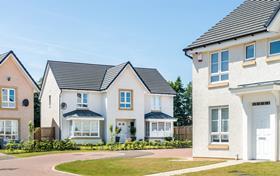 Barratt says it will buy another 10 sites north of the border by the end of the year taking the number of homes it expects to build as a result of an acquisition spree to 4,000.

The country’s biggest housebuilder, which last week said it wants to be building 20,000 homes a year in the future, has already snapped up 14 plots – the equivalent of 2,500 homes – in the first six months of the year.

Now the firm is eyeing another 10 sites which it says will give it capacity to build a further 1,500 homes.

The Scottish government estimates that 465,000 new homes are needed by 2035 to cope with demand.