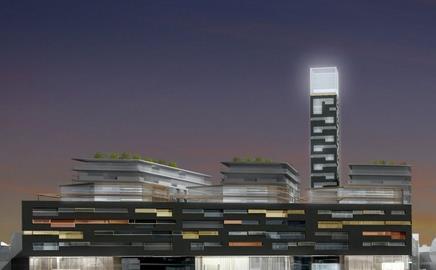 The first images of the revised scheme for the controversial Potters Fields site next to Tower Bridge have been released by developer Berkeley Homes.

Designed by architect Squire & Partners, the mixed-use scheme is a radical change from the previous designs for the site by Ian Ritchie, which were vehemently opposed by Southwark council.

The scheme has been developed by Squire & Partners in conjunction with the council and Berkeley Homes, in an attempt to resolve the long-running dispute over the site.

Potters Fields is owned partly by Berkeley and partly by Southwark, with the City of London Corporation also having a small slice of land.

Southwark were defeated on appeal over the disputed Ian Ritchie scheme, despite arguing that it was too high for such a sensitive location opposite the Tower of London and should include a sizable cultural use. Nevertheless, the council was able to block the scheme because of its landholding.

Despite the radical redesign, the new scheme includes broadly the same amount of space as Ritchie's original design, with 374 homes, and 8,000m2 of cultural space.

The main part will be around six to 11 storeys in height, with a residential “campanile” tower reaching 21 floors. The previous scheme ran between 12 and 19 storeys.

Murray Levinson, partner at Squire & Partners, said that the scheme had been discussed with representatives from Unesco, who supported it and said that it would not interfere with the Tower of London world heritage site.

The original plans for Potters Field