Building’s project of the year 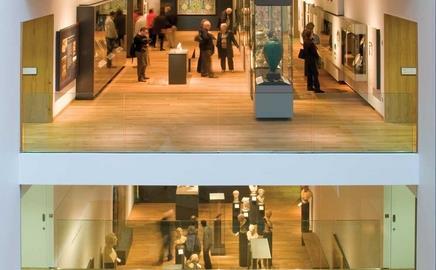 The entries for construction’s equivalent of the best picture Oscar had the judges racking their brains for superlatives. In the end, a new addition to an old museum got the nod

Rick Mather Architects and Mace Group entered this bold project, which involved flattening half of the existing Ashmolean and attaching a six-storey extension to the 19th-century, grade I-listed Cockerell building, doubling the museum’s capacity at a stroke. Classical and modern link seamlessly. Visitors go through the grand entrance of the Cockerell and into a new atrium with a grand staircase spanning five floors. They then wander over link bridges spanning double-height galleries, glimpsing other parts of the collection through glass panels. This provides a link between the collections – which span from Egyptian antiquities to 20th-century paintings – and helps visitors orientate themselves. Generous natural lighting also helps visitors find their way around and cuts energy use. Internal space has been maximised in this height-restricted project by putting ducting in the walls rather than the ceilings and using display cabinets to form part of the walls. Externally, the Cockerell building is still very much the public face of the Ashmolean – but the extension, hidden behind existing facades, provides an exhibit in its own right.

Twenty-three storeys of weathering steel, twisted like a Rubik’s Cube, sit on one of Leeds’ highest hills. This student accommodation block for Leeds Metropolitan University, and two low-rise blocks at its base, share the same Corten cladding and random-looking arrangement of windows (which were in reality computer modelled to maximise natural light). A recent poll in the Yorkshire Evening Post declared Broadcasting Place the most popular building under 100 years old in the city.

Foster + Partners’ first hospital is intended to herald a revolution in healthcare. It was built for Circle, a partnership of some 2,000 clinicians, who say the building is intended to put the idea of hospitality back into hospital, so it was modelled it on a boutique hotel. It is certainly boutique in scale, with just 28 beds. The central atrium feels like a traditional drawing room, and consulting rooms are finished in high-quality materials.

An eight-storey, 65m-long sprayed concrete cocoon encased in a giant glass box has been added to this famous museum. It is intended to keep out anthrenus museorum, or the museum beetle, which would munch its way through the museum’s 20 million insect and plant specimens. These are housed in 3.3km of cabinets in an environment maintained at 17ÞC and 45% humidity.

Luton hosts the largest one-day carnival in the UK, so it’s only fitting it should also be home to the country’s first building dedicated to the carnival arts. It provides everything from rehearsal spaces to business units and an education centre that offers degrees in carnival studies. At the heart of Ash Sakula’s design is the camp where floats are built. This is quite a secret activity so the building had to be flexible enough to accommodate different groups working in privacy.

British Land’s most sustainable building to date has a BREEAM “excellent” rating and a B-rated energy performance certificate. The 20-storey City office has an innovative facade that appears to be all glass but 60% of it is actually covered in solid panels that cut its cooling load 25%. The building steps back in four stages to provide attractive planted terraces. Two teams delivered the project, led by Arup Associates and Mace, and they did it for 5% less than predicted.

A nearby First World War tank training test centre is clearly referenced in Marks Barfield’s design. The cladding fixings are a nod to the rivets used for tanks and they’ve even managed to get ”tank” into the name. The building is intended to encourage innovation in small businesses, and includes offices, workshops and two conference areas. Sustainability was a big driver, so the building has a green roof, good insulation, solar panels and a closed loop ground-source heat pump.

This 50,000m2 office development makes the most of its Thames-side location. Two 12-storey blocks step down towards the river, each providing stunning views. The building looks good, too: one of the two blocks has angled oak beams supporting brises-soleil and the other has striking timber louvres. Minimising environmental impact was important to Sir Robert McAlpine so it reused 80% of the previous building’s foundations.