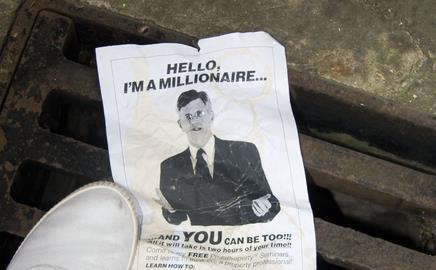 It may be the end of the road for the amateur investor, but with the rental market still strong, housebuilders are trying to find new ways of appealing to serious backers.

What a difference a year makes. Just 12 months ago, the housing world was in the grip of a mortal panic about the rapid proliferation of buy-to-let properties across England’s towns and cities. Apocalyptic tales abounded of swaths of brand new flats owned by small-time or bulk investors lying empty from Greenwich to Manchester. The absentee owners’ only interest was in sitting back and watching the paper profits rack up as house prices continued to rocket skyward. The general feeling of these buy-to-leave landlords was “who needs tenants?” with all the problems of maintenance and collecting rent.

As 2008 gets into its stride, however, housebuilders will be letting out a nostalgic sigh for the days of the buy-to-let bogeyman as a combination of higher interest rates, tightening lending criteria and plummeting house prices has sent investors scurrying to hide under the bed-clothes.

So has the buy-to-let new-build market collapsed or is it just changing direction? At the moment, and despite what you may have read, it seems it is actually the latter. Research from property consultancy Savills indicates that the pain of the downturn is mainly being felt by the smaller, so-called amateur investors who borrow very heavily to buy.

“The rental market is set to benefit from the downturn and credit squeeze,” he says.

“Those buy-to-let novices who’ve been using 100% mortgages will no longer be in the marketplace. But a strong rental market will allow proper investment decisions by serious buy-to-let investors, who will buy on a yield that will achieve a sensible cost recovery, where growth in values in the future will become profit.”

But developers should not be thinking they are out of the woods just yet. Savills suggests that investors are more likely to be looking for bargains overseas than in the UK. The report says there will be “less emphasis on new-build flats, particularly in areas of high supply”. This points the finger at urban areas such as Leeds and Manchester, which have been colonised by blocks of city-centre flats.

Any even a small contraction in demand from investors will have a massive impact on developers. Research carried out by the Greater London Authority last year estimated that more than 70% of new homes were being bought by investors, underlining how reliant housebuilders have become on off-plan sales to this sector of the market. And already the new-build sector is being hit by the disappearance of the property investment clubs that have been responsible for much of the recent bulk-buying of flats.

Those buy-to-let novices who’ve been using 100% mortgages will no longer be in the marketplace. A strong rental market will allow proper investment decisions by serious investors

As a result, Yolande Barnes, director of Savills Research, says that developers are blowing the dust off incentive packages last seen in the early nineties, such as retaining a share of the equity. At least one large developer is understood to be retaining a block that it cannot sell. And rental guarantees have edged up to 8% of the value of properties.

An example of the kind of offers available can be seen at Redrow Regeneration’s Barking Central scheme. Bradley Martin, associate partner for new homes sales and marketing at Knight Frank’s east London and Thames Gateway office, says that as well as offering guaranteed rental income for two years, the developer will also promise to find a tenant. He says: “You will have two years of stability and regardless of that we are going to put a tenant in there until 2010. You will have all of that time of capital growth and you won’t have to worry about it until 2010.”

But where work has not started on site, many developers are trying to decide whether schemes can be replanned to appeal more to owner-occupiers. Crudely speaking, this usually means more space both within and without the home, including balconies, bigger kitchens and bathrooms and more lavish communal areas. The silver lining for housebuilders is that they should be able to achieve a better asking price.

The speculation-driven market of recent years means that prices, and therefore specifications, have been driven down by the urge to keep selling prices beneath the £250,000 benchmark, above which the stamp duty rate jumps up to 3%. David Birkbeck, director of Design for Homes, says owner-occupiers will be less put off than investors by higher stamp duty.

However, many sites cannot be replanned in this way because the developer has paid for the land on the assumption that they can cram in small, investor-friendly high-density units. Section 106 and affordable housing costs coupled with build-cost inflation and lack of demand from investors will make many such schemes uneconomic now. “There are people with unimplementable consents around agreed a year or two ago, that don’t stack up now,” says Barnes. She expects developers to sit on these schemes until the market recovers, sterilising the sites.

One happy consequence of the downturn is that less new buy to let flats will be left empty by speculators in order to pocket capital growth without the hassle of dealing with tenants – the so-called “buy to leave” phenomenon. “Buy-to-leave is a pretty speculative market and the returns are not high enough at the moment,” Barnes says. But those leaving properties empty appear to be sitting on their properties. “Some people are deciding to sell because the numbers don’t stack up, but there’s not a dramatic increase in properties going to auction,” says Perry. “There are vulture funds out there that are waiting to pounce, but I’m not sure it’s quite the right time. Prices have not fallen enough to make it completely irresistible,” says Barnes.

Another factor likely to be holding back landlords from disposing is April’s upcoming cut in capital gains tax rates. However, Rupert Dickenson, chairman of the British Property Federation’s residential committee, believes that it’s the start of a new era. “A lot of the development of the past decade has been pre-funded by the buy-to-let market, but we can’t expect that level of pre-funding to be there. If we are going to meet the government’s target there will have to be an alternative investment model.”

Donnell agrees: “Housebuilders have to wake up to the fact that the fundamentals of their business model have changed.”