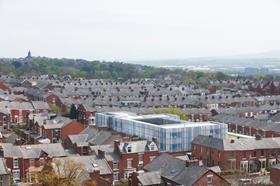 Capita is scrapping its Capita Symonds brand, with the consultant to be rebadged as Capita property and infrastructure.

The firm also announced that it had appointed Richard Marchant as chief executive of Capita’s property and infrastructure business. Marchant has been in the role, in an interim capacity, since February 2013. He will also join the Capita divisional executive board.

A Capita spokeswoman said the rebranding would be rolled out over the summer, with the Capita Symonds name to disappear over the “next couple of months”.

He has held a number of senior management positions within the Group and has extensive experience in public and private sector partnerships.

In 2002, he became managing director for Capita property consultancy, which became Capita Symonds after acquiring Symonds Group in 2004. Symonds was established in 1960.

Andy Parker, Capita deputy chief executive and joint chief operating officer, said: “Since his appointment in February, Richard has achieved significant improvements across the business including a new executive board at Capita property and infrastructure.

“I am delighted that he has agreed to take on the chief executive role on a permanent basis and expect the business to continue to grow and strengthen under his leadership.”