Exclusive: URS in talks with city authorities to draw up plans for scheme linking city centre with Cardiff Bay and Penarth 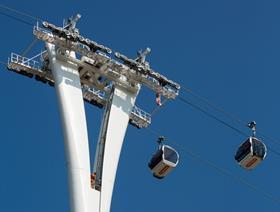 Cardiff is drawing up ambitious plans to build a £120m cable car system to link its city centre to developments in Cardiff Bay, Building can reveal.

Cardiff council’s inward investment arm Cardiff Business Council is in preliminary talks with engineering firm URS, part of Aecom, to draw up a feasibility study on a potential cable car. The cable car would carry up to 2,500 passengers per hour from the city centre to the attractions and businesses in Cardiff Bay.

The move emerged in a week that Cardiff received a further boost in this week’s Budget (see pages 10-11). Chancellor George Osborne said the government has opened negotiations with the city - alongside Aberdeen and Inverness - about striking new city deals to invest more central government funding in these cities.

Cardiff Business Council chairman Nigel Roberts said: “The cable car is a sensible alternative to a potential tram and would create an iconic project. With a cable car you would have fantastic views, all the commuter traffic can use it, and it would be part of the city’s infrastructure as well as a tourist attraction.”

The proposed cable car would transport people in huge gondolas from Cardiff Central station and Foster + Partners’ Cardiff Central Square development down to Cardiff Bay and on to Penarth. The entire route would be about four to five miles in length.

The cable car has been estimated to cost about £20m per mile to build, and would replace or supplement the metro transport system that has been announced as part of the Wales Capital City Region, a £4bn transport project to link 1.4 million people in the wider area into a comprehensive transport infrastructure by 2030.

Cardiff Bay is one of the city’s fastest growing districts, having attracted investment in recent years from Pinewood Studios and the BBC, while Penarth is the most popular seaside resort in the Cardiff area.

Any feasibility study would look into the potential costs, as well as the time it would take to build and the possibilities of attracting funding.

Roberts said in advance of the Budget that he hoped funding could be sourced through a city deal. He added: “We need to demonstrate the return on investment so that we can gain seed capital. We have a number of options available to us but a city deal would be one of them.”

Paul Webber, director at Arup, which worked on London’s cable car for the 2012 Olympics, and a member of the Cardiff Business Council board, said: “There’s a definite need for a link to Cardiff Bay and a cable car provides the ability to get around that part of the city quite quickly. It would also be a striking tourist attraction which would help put Cardiff on the map.The next step is a proper feasibility study to look into costs, time taken and how to fund it.”