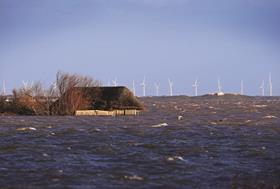 The government’s climate change watchdog has warned that current plans for spending on flood defences are as much as £1.4bn below the level required to ensure that the flood risk for homes across the country does not increase.

In a detailed analysis of the Department for Environment, Food and Rural Affairs (Defra) spending on flood defences, the Committee on Climate Change also warned the funding shortfall meant the government was storing up £3bn or more of costs as a result of avoidable flood damage.

In the analysis (attached right), published in response to the debate over flood spending, the CCC said there had been a “significant fall” in spending on flood defences since the peak in 2010-11, with the Environment Agency’s (EA) flood defence budget falling from £659m in 2010-11 to £521m in 2011-12.

Comparing current spending plans against the EA’s long-term investment strategy, the watchdog said an additional £20m plus inflation would need to be spent on flood defences each year for the next 25 years just to “hold constant the number of properties at significant flood risk over time”.

It added that an extra £50m plus inflation per year would be required to “make headway and reduce the number of properties at risk over time”.

It warned that spending plans for the current spending period were £380m behind the EA’s “least expensive scenario” aimed at “holding constant” the number of homes at risk, and “more than half a billion” below the amount the agency estimated needed to be spent to avoid risk increasing over the long-term.

It added that over the next spending period, from 2015-21 funding from Defra will be £1.4bn behind what the EA estimated is needed to avoid flood risk increasing.

The watchdog added that analysis of spending on flood defences showed that every £1 spent on average prevents £8 in future flood damage: “The current ratio implies that each £1 taken from the programme means expected future flood damages will be £8 higher than otherwise.

“Value for money will be less strong amongst schemes on the margin, perhaps achieving £6 in benefits per £1 spent.

“But even at this more modest rate of return we can expect an extra £3bn in avoidable flood damages in future years because spending this period is half a billion pounds behind he identified need.”

Lord Krebs, the chair of the CCC’s adaptation sub-committee, this week told the Guardian that cutting flood defence spending was a false economy. “Ministers are perfectly entitled to say ‘look we just don’t have enough money and we will have to accept a greater risk of flooding.’ That is a political judgment which needs to be made.

“[But] in the long term these measures pay for themselves.”

Meanwhile, Lord Smith, the under fire chair of the EA, welcomed the prime minister’s promise that “money would be no object” when it came to repairing the damage from the recent flooding, but added: “I hope he will apply the same principle to the longer-term issues about improving our flood defences.

“One of the things that has worried me is whether flood defence is seen by the Treasury as a high enough priority.”

A Defra spokesperson said: “We have spent £2.4bn on flood management and protection from coastal erosion over the past four years.

“We will continue to build defences where they are needed.”