Both Balfour Beatty and Kier have told the NHS trust behind the stalled Midland Met Hospital that they want their expected £1m bid costs to be paid for if they miss out on the deal to complete the work.

Both were among five firms that attended an open day held by the trust in the autumn to find a replacement contractor for Carillion which was carrying out work on the Birmingham hospital before it went bust a year ago this month.

Balfour Beatty, which is onsite carrying out an early works programme that is due to wrap up this May, and Kier’s demands have been revealed in minutes published ahead of the latest monthly board meeting of the Sandwell & West Birmingham Hospital NHS Trust taking place this morning where chief executive Toby Lewis is set to give an update on the process to find a replacement builder.

The pair were joined at the open day by Sir Robert McAlpine, Laing O’Rourke – which has since been appointed to replace Carillion on another hospital scheme in Liverpool – and Graham Construction.

The scheme, which is being bankrolled by the government, is expected to cost more than £400m to complete with the trust hoping the work can be completed in 2022. The hospital had originally been due to open in the middle of last year.

In the minutes on feedback from the event, Balfour Beatty was described as “expect[ing] bid costs of circa £1m to be underwritten in the event that they are not successful” while Kier, which the trust said was expected to try and team up with M&E specialist NG Bailey, had also “raised the issue of bid costs and underwriting should they be unsuccessful”.

On Kier’s bid, the minutes added: “They do not have significant large acute healthcare experience and there is a risk they could fail the selection questionnaire stage.”

The minutes also said Graham was “not expected to bid” while they also mentioned Skanska which had been working with the trust earlier last year about taking over from Carillion before pulling out last spring after being lined up to carry out the work.

Skanska did not attend the bidders’ day and the trust’s minutes admitted: “The bid investment already made and lost is expected to preclude them [Skanska] from further participation…it is a very low probability that they would now compete for the Midland Met.”

The trust’s board has also been told “contractors welcomed the trust retention of prior risk relating to Carillion” but had flagged issues over the risks associated with the MEP and fit-out work already carried out.

“Concerns [were raised] regarding the interfaces,” they said, “specifically energy performance, the retention of existing major plant, the time needed to get comfortable with it and the value for money implications should it end up being replaced.”

The trust said a decision on which one of three shortlisted bidders will be chosen to finish the hospital is expected by the summer after what it called a “competitive dialogue” process which could take between four to six months.

Among the early works Balfour Beatty is carrying out is roofing, balustrading, temporary heating, glazing, completion of ramps and plantroom cladding. 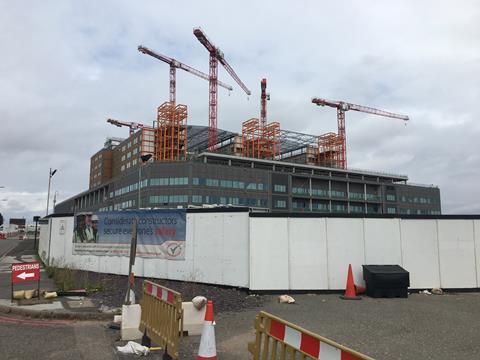 How the scheme looked in September last year