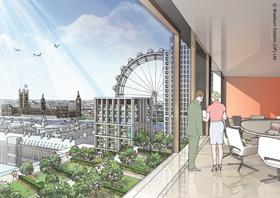 The developer of the massive Shell Centre revamp on London’s South Bank has expressed “surprise” and “disappointment” at the government’s move to ‘call in’ the plans for further scrutiny and hopes the scheme won’t be delayed by more than four months.

Speaking to Building, David Pritchard, chairman of Canary Wharf Group, which is developing the Shell Centre revamp in a joint venture with Qatari Diar, said the move by planning minister Nick Boles this month to call in the scheme came had come as a surprise as the plans had been given the green light by Lambeth council and the mayor of London.

Pritchard said: “Certainly [we were] disappointed and, frankly, surprised, because we put a lot of effort into the consultation around the design to ensure that it did meet the heritage issues.

“It’s disappointing too, from a social standpoint, apart from the construction aspect, because it was going to attract thousands of jobs, considerable volume of retail, and affordable housing, as well as being quite key to the redevelopment of that whole Waterloo area.

“So it’s all a bit surprising.”

Pritchard said the scheme, which will be built out by Canary Wharf Contractors, was due to start on site in November, but now could be delayed by three or four months.

He said he understood the public inquiry would be expedited, with the hearing expected to take place in November, but the outcome is unlikely to be decided until early next year, meaning the best case scenario is for construction to begin onsite in February or March.

The scheme, which could be worth up to £1bn on completion in 2019, will retain the famous 27-storey Shell Centre Tower and the building’s main occupier Shell will take a further 245,000 sq ft of office space in the wider scheme.

The move to call in the scheme followed an earlier decision by the planning minister to call in the John McAslan-designed redevelopment of historic Smithfield Market, which has proved controversial with heritage campaigners, despite being approved by City of London planners.

However, ministers decided not to call in the controversial Elizabeth House scheme, near Waterloo, which is opposed by Westminster council and English Heritage, raising concerns about the consistency of decision making in the Department for Communities and Local Government.

It is understood that Boris Johnson was furious at the minister’s move to call in the Shell Centre plans and has sought assurances that any public inquiry will be expedited, with the mayor’s office reiterating the importance of the scheme to the regeneration of the Waterloo area.

John Garwood, company secretary at Canary Wharf Group, said the developer expected the scheme to be given the green light. “In theory it could [be refused], but given the attention that was paid to all of the interested parties, we would be surprised if that was the outcome,” he said.

“We had around 200 meetings through the consultation; the planning application had very few objections; the council approved it - so it’s really hard to see where the real opposition is coming from.”

Meanwhile, Pritchard said Canary Wharf Group expects construction to start on site on its 58-storey residential tower in the docklands early next year.

The Diamond Tower scheme, a 212 metre tall residential tower, was submitted for planning approval to Tower Hamlets council in June, will comprise 566 apartments and is on the Newfoundland plot in Canary Wharf, bordered by Park Place, Westferry and Heron Quay road, at the western end of Canary Wharf looking towards the city.

The scheme, known as Diamond Tower due to its distinctive design, is designed by Horden Cherry Lee Architects.