Scheme is part of wider investment in area 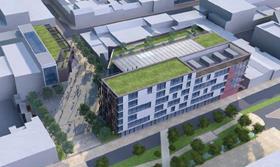 Gleeds has been appointed as project and cost manager on a £30m Kingsway Digital Employment Hub in the midde of Swansea.

Work on the 100,000m2 office space (pictured), which has been earmarked for businesses operating in sectors such as computing and life sciences, is due to begin in 2019.

The Oceana nightclub that previously occupied the plot has already been demolished, as have properties on two plots in Oxford Street which will be made into a pedestrian walkway.

The hub is one of 11 big projects being funded by the Swansea Bay City Deal, a £1.8bn investment in the south west Wales area which includes nearly £250m of taxpayers’ money.

The development is part of an ongoing regeneration programme being masteminded by the city council which will see construction of a 3,500-capacity arena, a digital square as well as new retail and residential buildings in the city centre.

Other firms working on the Kingsway scheme include WSP, architect Architecture 00 and property agent Cushman Wakefield.