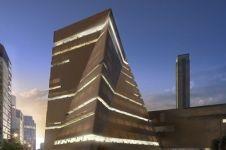 The government has confirmed funding for a raft of cultural projects, including extensions to the Tate Modern and British Museum, easing fears the ambitious arts building programme would be derailed by budget constraints.

Under today’s announcement from the Department for Culture, Media and Sport, the British Film Institute national film centre on London’s South Bank will also receive £45m and a new visitor centre at Stonehenge will get £10m.

The news comes three months after reports exposed a £100m black hole in the department’s finances for the financial years 2009/10 and 2010/11, causing speculation key projects could be ditched.

But today the government insisted it would honour its promises, with £50m to go towards the Tate Modern extension, £22.5m towards the British Museum’s World Conservation and Exhibitions Centre and £33m to the British Library’s newspaper archive in new premises in Yorkshire.

Announcing funding for the new film centre, prime minister Gordon Brown said: "These are challenging economic times but with backing from the public and private sector, the commitment to the new BFI National Film Centre demonstrates the government's continuing support for the arts in Britain, and our determination to invest in leading creative industries as part of our economic recovery.

“This is a great British success story and shows what can be achieved with a government that backs talent and gets behind industry."