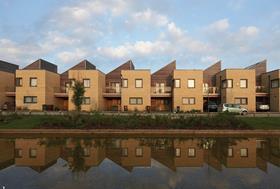 Heads of terms have been agreed on a £55m loan for construction of a long awaited rail line that is designed to unlock a vast Bellway housing scheme in east London.

In today’s Autumn Statement, Chancellor George Osborne announced that the government had agreed principal heads of terms on a £55m loan, which will support the extension of the London Overground line to the Barking Riverside scheme, with London mayor Boris Johnson and the developer.

The development, which is also known as City East, will deliver around 10,000 homes over the next 12 years.

The scheme is planned for 433 acres of brownfield land, which used to be the site of a power station, that occupies a 2km stretch of the River Thames.

A rail link has long been seen as key to spurring the regeneration of the site, which has poor transport links with central London and stalled three years ago.

Bellway Homes Essex managing director Richard Burrows said: “The announcement of the rail link extension is a significant milestone for us as it allows us to commit to spending more money on bringing forward the next few phases of development, which will provide a total of 10,000 new homes for London.

“We are incredibly proud of what we have achieved here but we still have a long way to go. Hopefully the rail link extension will motivate other people and organisations to see the potential that Bellway has championed at Barking Riverside for years.”

Two-bedroom apartments, priced from £184,995, and four-bedroom family homes, starting at £319,995, are currently on sale at Barking Riverside.