Scheme in south London will run to 26 storeys 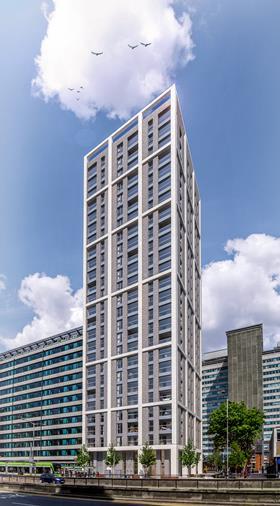 How the new scheme will look

West London firm Henry Construction has been appointed to build a 26-storey residential block in Croydon called Cambridge House after it was given the green light by borough planners.

The scheme on Wellesley Road by architect BPTW Partnership is being developed by housing association Notting Hill Genesis and will include 92 one, two and three bedroom apartments.

Others working on the brick-clad building include structural engineer Aecom along with landscape architect Allen Pyke.

Henry Construction is currently on site at another housing scheme in the town, turning the former headquarters of the council into more than 500 homes.

Designed by architect AHMM, the scheme includes a 35-storey block with three other blocks of 21, 19 and 13 storeys. It will also include 1,200 sq m of retail and commercial space.