Scheme being carried out in Chilterns

HS2 has admitted losing a huge quantity of a potentially highly polluting substance into a chalk aquifer during the construction of a ventilation shaft for a tunnel on the high-speed rail link. The railway gave reassurances earlier this year that leaks would be prevented.

Europe’s largest infrastructure project lost 1,600m3 of bentonite slurry - enough to fill 48 shipping containers - into an “unexpected fissure” at the Chalfont St Peter shaft site late last year. Align, a joint venture comprising Bouygues Travaux Publics, Sir Robert McAlpine and VolkerFitzpatrick, which is the main contractor on the site, has produced a report on the incident.

HS2 said the slurry was 97% water and 3% bentonite, and that the Environment Agency was “notified on a daily basis” of the total quantity lost.

Network Rail describes bentonite, a type of clay formed from volcanic glass which can swell to up to eight times its volume when it absorbs water, as “highly polluting”. In an environmental guide on the substance, Network Rail warns that bentonite can cause damage to plants and animals if it enters watercourses or drains.

The guide adds that any spillages should be immediately reported and “promptly cleared up”. 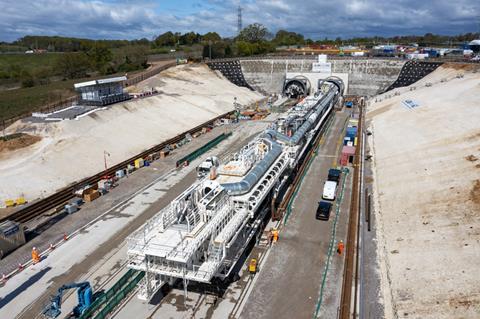 The bentonite slurry was lost at a shaft site close to HS2’s South Portal, where the 16km Chiltern tunnels are being built by Align

HS2 said that the bentonite had “settled in fractures and fissures in the area around the shaft, where it will remain unless disrupted by direct excavation into these areas”.

An HS2 spokesperson said: “Bentonite is a safe, naturally occurring form of clay that is widely used across the construction industry as well as in agriculture and cosmetics.

“While we regret the loss at this location, monitoring has not identified any adverse effects on the aquifer or on water supplies, and the Environment Agency and water company have raised no concerns.”

The Environment Agency is now facing a judicial review over its approval of the works brought by local campaign group Misbourne Environmental Protection.

The group intends to force the government agency to reconsider the tunneling project on the railway, which includes the construction of the 16km Chiltern tunnels, to ensure that any tunnels run entirely through solid chalk.

Paul Jennings, of the River Chess Association, which monitors the environmental impact of works such as HS2 on the area, told the Guardian: “This incident casts doubt on the competence of HS2/Align as project operators.

”They seem surprised to have lost all this bentonite slurry at the Chalfont St Peter vent shaft. The lost bentonite sits in the aquifer waiting to be moved by migrating ground water as it flows through a matrix of cracks and fissures.”

The Environment Agency said it takes the protection of groundwater and watercourses, as well as the wildlife and ecosystems that rely on them, “very seriously”. However, it declined to say whether it agreed with Network Rail’s assessment of bentonite as a highly polluting substance.

The Environment Agency spokesperson added: “The agency is working closely with HS2, their contractors, local community groups, the water industry, and local authorities to ensure the environment is protected throughout the project.”

In June, HS2 insisted that it had the “right tools for the job” to stop water supplies being contaminated amid concern from local groups.

Mark Clapp, the railway’s senior project manager, said that “a lot of science” had gone into preventing water supplies being impacted by the risk of chalk dust leaking into underground aquifers during the construction of the Chiltern tunnels.

Both organisations signed off the tunnelling works after HS2 agreed to fund £100m worth of added capacity to local water treatment plants to maintain the quality of local supplies.

HS2 said it takes its responsibilities “incredibly seriously”. It added: “we have a world-leading team of engineers, hydrogeologists and environmental scientists in place to ensure that the tunnelling operation affords the right protections for the environment, and is completed as safely and efficiently as possible.”

Bentonite slurry is used to fill and support the sides of excavations during the construction of certain types of walls.