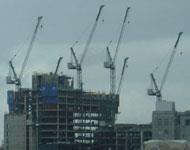 The Health and Safety Executive has written to all crane hire and supply companies asking them to take measures to improve safety in the sector.

The move follows the body’s investigation in the collapse of a luffing jib crane in Liverpool in January last year, which killed one worker and injured another.

Zbigniew Roman Swirzynski, of Preston, died after being struck by a 2.4 tonne concrete counterweight that fell from the crane in Colquitt Street. An inquest last month recorded a verdict of accidental death.

• Consult the manufacturers of their cranes to see if the failure mechanism described in the report is relevant to the cranes they operate (and act on any recommendations they may make).

• Review their own equipment, systems and procedures and take any necessary action.

• Provide information to their own staff and those who operate or hire their cranes.

The HSE investigation is not yet complete but the body has issued a technical report to crane firms, explaining the most likely cause of the incident.

It is thought a gust of wind blew the jib upwards and caused the luffing rope to jam.

The crane snapped just below the driver’s cab and toppled onto the building site, where a residential block and car park were under construction.