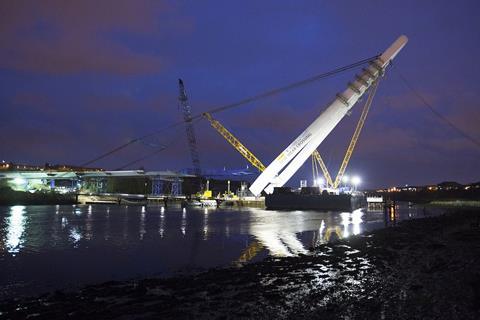 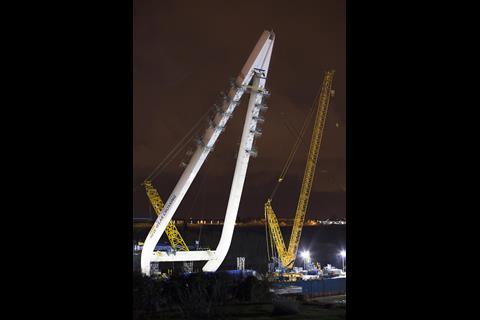 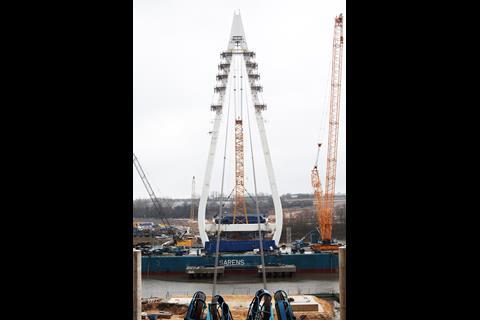 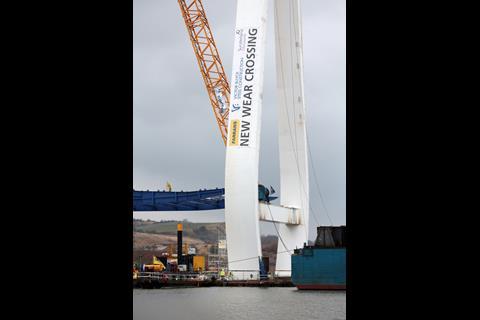 The centrepiece of Sunderland’s new bridge, which stands twice the height of Nelson’s Column, has been lifted into place.

The 100m white A-frame structure, which will be the focal point of the New Wear Crossing, was raised to its 90-degree resting place on Saturday.

It was fabricated by Farrans Construction and Victor Buyck Steel Construction, which formed the FVB joint venture to deliver the project on behalf of Sunderland City Council. The bricge has been designed by architect Stephen Spence and engineer Techniker.

The lifting of the pylon took 15-and-a-half hours – split over two days – to complete.

The 1550-tonne pylon, which is equivalent in weight to 125 double decker buses and twice the height of Nelson’s Column, was the heaviest structure to have been raised this way since the erection of the London Eye in 1999, according to Sunderland City Council.

It will be visible from across much of the city and from the A19, which bypasses Sunderland to the west.

The new crossing, which links Castletown to the north of the River Wear with Pallion to the south, is designed to improve road links from the from the A19 and A1 to the Port of Sunderland. It will also help to open up the south bank of the Wear, including the former Vaux brewery and Hylton Cranes sites, for regeneration.

“For a long time, a huge swathe of land along the south bank of the river was in need of regeneration and this bridge is enabling us to do that,” said Paul Watson, leader of Sunderland Council. .

“Developers are already showing interest in regenerating this area, which will bring investment into Sunderland, create jobs and boost confidence in the city.”

Patrick Van Severen, project director for the pylon fabricator Victor Buyck Steel Construction, said the next phase of the project will be to launch the bridge deck across the river in spring and then start connecting the cable stays in the summer.

Watson said the project is due to be completed by the spring of 2018.