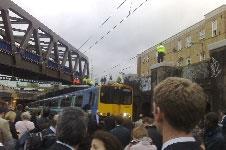 Human error was to blame for the partial collapse of a rail bridge on 28 May, according to a report published today by Transport for London (TfL).

Despite the presence of TfL inspectors on site, Bridge GE19, which forms part of the East London line extension, dropped 200mm after subcontractors, using temporary supports, made final adjustments before placing it on its permanent fixtures.

TfL London Rail's director of safety, Martin Brown, said: “It was a unique event that we want to ensure cannot be repeated on any other bridge installation.”

The working methods of the subcontractors were not cleared with the TfL project engineers or the site's principal contractor, a Balfour Beatty/Carillion joint venture.

“The positioning of the Teflon pad was a human error,” said Mr Brown. He admitted: “the procedures we have should have stopped this error occurring. There is a collective responsibility for ourselves and our contractors to ensure these procedures work.”

Two other East London line bridges put in place around the same time have been checked and no problems have been found.

The East London line extension is due for completion in June 2010. The bridge will carry London overground trains over the six tracks leading out of Liverpool Street.