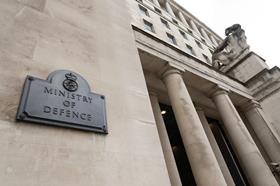 Interserve has slammed the Ministry of Defence’s award of more than £4bn-worth of construction contracts to a Carillion joint venture, claiming in court papers that the winning bid could be “abnormally low” and “undeliverable” and that the competition for the work was
not “fair”.

As Building first revealed last month, Interserve has launched a legal challenge to the award of three massive Ministry of Defence (MoD) construction contracts, together worth up to £4.35bn, to a joint venture between Carillion and Amey in a move that prompted
the MoD to suspend the procurement process.

This week it also emerged that more consultants are preparing legal challenges to the government’s procurement of a £750m public sector consultant’s framework.

The news of the legal challenges comes as the government this week outlined its progress on improving its procurement at the Government Construction Summit in London, where business secretary Vince Cable, infrastructure minister Lord Deighton and chief construction adviser Peter Hansford debated with industry the steps that need to be taken to deliver on the industry’s industrial strategy.

Interserve’s legal challenge, which it has now filed at the Technology and Construction Court, alleges that the winning bids from the Carillion-Amey joint venture for the three Next Generation Estates Contracts (NGEC) “could be abnormally low and/or undeliverable”.

In court papers, seen by Building, Interserve claims that the MoD was aware of this but “failed” to investigate, which it says constituted “a breach” of the principles set out in the procurement.

Interserve also claims that the MoD “did not provide any or any proper information on the characteristics and relative advantages of the winning bidder”, and that despite repeated requests for more detail the MoD only provided “very limited information”.

“Nonetheless, it is clear from the limited information provided that the [MoD] was aware that Carillion-Amey’s tender could be abnormally low and/or undeliverable,” the court papers claim.

Interserve claims that as a result of the MoD’s “failed” procurement process it “lost the opportunity to take part in a fair competition and/or win the contract”.

It said it was therefore seeking the contract award decision to be “set aside” and that it be awarded compensation for “loss and damage, namely the profits on the anticipated contract and/or its wasted bid costs”.

The court papers state that the exact amount of compensation claimed will be set out at a later date, but that across the three contract awards that are being challenged it expects compensation in excess of £900,000.

The contracts are for repairs and maintenance work across the defence estate, as well as facilities management and construction projects worth up to £3.9m.

Procurement on the contracts began in February 2012, with the shortlisted contractors announced in June 2012.

The legal challenge and delay is the latest in a long line of problems to hit the procurement of the MoD’s wider suite of NGEC contracts, some of which began procurement nearly four years ago. They were hit by a series of delays as the MoD sought to undertake a massive restructuring programme, as well as contracting a private sector partner to take over the operation of its estate arm the Defence Infrastructure Organisation (DIO).

Carillion, Interserve and the DIO all declined to comment.