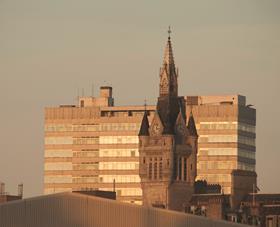 Keepmoat has won a £18m contract to refurbish seven multi-storey towers in Aberdeen.

The firm has been appointed by Aberdeen City Council for the two-year Seaton 7 project to enhance the energy efficiency of the towers and refurbish the exterior and public spaces in each block. The new project follows on from a similar scheme elsewhere in the city.

Works will include installing a ‘rainscreen’ overcladding system for each tower block, new energy efficient windows, structural repairs and upgrades to public spaces such as the entrance and foyer.

“We have already renovated four blocks in the Seaton area and this will be another seven which have been identified through our asset management plan as requiring renovation work. The work will include overcladding, new windows and energy efficiency measures.

“The benefits of this are that as well as making the homes fully wind and water tight for the future the tenants or residents will benefit from reduced fuel bills through being connected to the city’s award winning Combined Heat and Power system (CHP) which generates an average of 50 percent saving on bills and 90 percent saving on carbon emissions.

Eamonn McGarvey, regional managing director for Keepmoat in Scotland, added: “We are delighted to be working with Aberdeen City Council on the ‘Seaton 7’ project.

“Over the next couple of years, the delivery of this project will see the energy efficiency of the buildings greatly improved, which will significantly benefit residents by providing warmer homes and allowing them to reduce utility bills while enhancing the Aberdeen skyline.”

The programme is expected to start in the next few weeks with Keepmoat employing 80 people for the work.