Labour insists it's not 'anti-housebuilder' 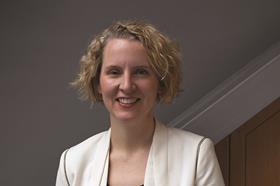 The report by Sir Michael Lyons set out a blueprint to increase housebuilding in England to 200,000 homes per year by 2020 under a Labour government, in part through encouraging contractors, self builders, councils, housing assocations and smaller builders to develop more homes.

The recommendations included expected powers to clamp down on perceived land banking by housebuilders, through giving councils more powers to forcibly buy land off developers, to tax unbuilt developments, and limit the length of planning permissions.

But Reynolds (pictured) told Building this week: “We’re not anti-housebuilder, we’re very clear about that. The fact is we need everyone to do a lot more. Big housebuilders are essential in this. But to be frank there is land banking going on and it needs to be tackled.”

Government figures show that a little over 110,000 homes were built in England in the year to April 2014, meaning Labour will need to nearly double housebuilding rates.

Lyons proposals included giving “red-line” planning permissions to builders of sites of less than 10 units, which would give smaller builders confidence that a scheme would be able to proceed before having spent a large amount working up plans.