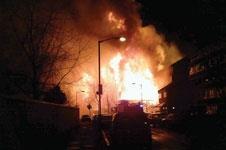 The London Assembly has called for an investigation into the fire safety of London buildings.

The assembly unanimously asked its planning and housing committee to investigate fire safety in buildings.

It follows a series of fires in the capital involving tall and timber-frame constructions, including last week's blaze in Camberwell, which was owned by the same developer that owned the Peckham site which went up in flames in November.

A motion agreed today highlighted the Colindale fire in 2006, during which a six story timber-framed building burned to the ground in less than nine minutes, and the recent fire in Peckham.

Assembly members called on the committee to look into possible changes to building regulations, with a view to making recommendations to the Mayor of London and central government.

Darren Johnson, chair of the London Assembly, said: "A series of recent blazes involving timber-framed buildings have all too graphically highlighted the vital importance of fire safety when designing and building people's homes.

“An assembly probe into how such incidents might be avoided in the future is the least we can do to minimise the fire risks to Londoners.”

Navin Shah, who seconded the motion, said: "A spate of recent incidents has emphasised the need for a swift review of construction methods and their impact on the fire safety of London's buildings.”