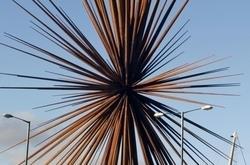 Council says that controversial Heatherwick sculpture, B of the Bang, cost hundreds of thousands in remediation work

Manchester city council claims to have spent over £280,000 on work linked with Thomas Heatherwick’s B of the Bang sculpture since it was built.

A freedom of information request made by the Manchester Evening News has revealed a breakdown of council costs for remediation of the 56m-high steel sculpture at the City of Manchester stadium.

Since it was completed in 2005, nine of the sculpture’s steel spikes have had to be removed, and it has had to be continuously inspected for fears of public safety.

The council is taking Thomas Heatherwick Studio and its subcontractors Packman Lucas, Flint & Neil Partnership and Westbury Structures to court over the sculpture’s problems. A High Court hearing will begin on 24 November.

A Manchester city council spokesman said: “We are claiming all costs associated with B of the Bang, including those incurred since it was built, from the four contractors through the courts. Legal proceedings, which commenced in October last year, are continuing.”