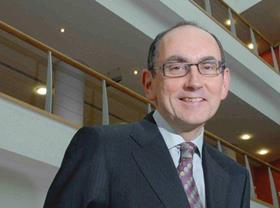 Whitehall mandarin Peter Lauener is taking over from James Wates as the next chairman of the Construction Industry Training Board – but will begin his new job while still working as the interim boss of the Student Loans Company.

Lauener (pictured) only joined the Student Loans Company back in November last year, after he was parachuted in to take over from Steve Lamey who was sacked from the £200,000-a-year role earlier that month following an investigation into his conduct.

The CITB said he will “initially” combine both roles – a move which will worry some as the training group reaches a critical time in its future.

A spokesperson for the Student Loans Company said it would begin the search for a permanent chief executive “very shortly”.

The CITB has announced plans to move out of its historic Bircham Newton home in 2020 and has promised a restructuring of its operations which could see 750 jobs axed as a part of a cost-cutting exercise.

Last autumn, the training body was given the backing of industry for another three years in its three year consensus vote – but not before housebuilders and the country’s biggest builder laid into it.

The Home Builders Federation said 89% of members voted against the CITB continuing in its role as training body for the sector while Balfour Beatty chief executive Leo Quinn said it should be scrapped – although the firm later threw its weight behind the group after it “provided Balfour Beatty with appropriate assurances and preliminary details about the reforms”.

Lauener had been due to retire last autumn after stepping down as the boss of the Education and Skills Funding Agency and Institute for Apprenticeships.

Announcing his appointment, apprenticeships and skills minister Anne Milton, said: “Peter’s knowledge of the skills industry, along with his experience, will help his work with the CITB to make sure that our country has the construction skills it needs.”

Lauener said he was “delighted” to be joining the group and starts at the beginning of next month.

Wates is standing down after eight years in the role and 16 years in total on the training group’s board.