New laws on energy efficiency will mean that 80% of London’s office space will need to be upgraded over the next seven years, Deloitte has said.

Legislation currently passing through parliament is expected to set minimum standards for energy performance in buildings that will require refurbishment work to be carried out on 15 million sq ft of office space in the capital, the firm estimated in a new report.

From 2030, it is anticipated that office buildings will need to have an Energy Performance Certification (EPC) rating of at least Grade B. The current minimum compliance level is Grade E. 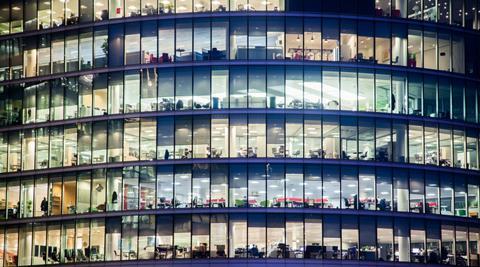 “We can expect to see continued growth in refurbishment activity to address value erosion caused by accelerating obsolescence and occupier choice.”

The estimates were included in Deloitte’s biannual London office crane survey, which also found that the vast majority of new construction schemes in London over the past six months were refurbishments.

Just five new build projects started during the period, a fall of a third since the last survey in November. Overall, shovels entered the ground on 36 schemes, 31 of which were refurbishments.

Parnell said that appreciation of the carbon emissions of existing structures is growing. “Brand new development will of course continue to happen, but the drivers and increasing preference to refurbish, reuse and recycle are clear.”

New office construction for both new builds and refurbishments in the six months to March was 2.3 million sq ft, a fall of one third.

Completions of office schemes also halved in the same period to 1.7 million sq ft, far below the long-term average of 2.5 million sq ft.

However, completions this year are now expected to gather pace and reach at least seven million sq ft, which would be the highest volume since 2003.

Deloitte real estate director Mike Cracknell said the figure had been driven by a raft of delays caused by supply chain disruption and labour shortages which had led to a lag for schemes to complete.

But he added: “Despite this, the market is displaying resilience with appetite amongst investors remaining strong. This coupled with occupier demand is contributing to confidence in the city.”

Some two-thirds of developers intend to increase their pipelines over the next six months, the survey reported.

Deloitte also said that occupier demand remains robust, with almost a third of space under construction being committed to by a tenant.

While two thirds of developers said occupier demand was a “little better” than six months earlier, and 14% said it was “much better”, concerns over the impact of hybrid working on the market are also growing.

Developers predicted that post-pandemic working will reduce demand for office space by 14% over the long-term, compared to 11% in November’s survey.