Foster + Partners have unveiled plans to build a new network of elevated cycle paths in London. 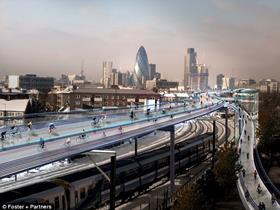 The first phase of the scheme, dubbed SkyCycle, would comprise a route from east London to Liverpool Street, which is estimated to cost more than £200m.

The cycle routes would be accessed via ramps.

Sir Norman Foster said: “I believe that cities where you can walk or cycle rather than drive are more congenial places in which to live,” he said.

“To improve the quality of life for all in London and to encourage a new generation of cyclists, we have to make it safe.

“However, the greatest barrier to segregating cars and cyclists is the physical constraint of London’s streets, where space is already at a premium.

“SkyCycle is a lateral approach to finding space in a congested city. By using the corridors above the suburban railways, we could create a world-class network of safe, car free cycle routes that are ideally located for commuters.”

Sam Martin and Oli Clark of Exterior Architecture Ltd said: “SkyCycle is an urban cycling solution for London. A cycling utopia, with no buses, no cars and no stress.”