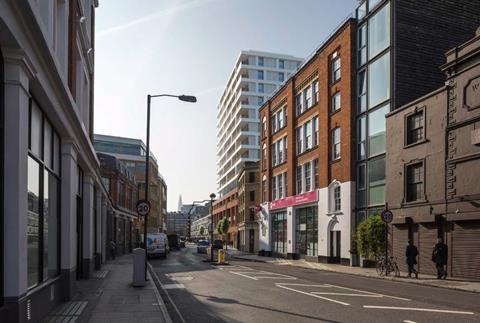 The London Borough of Islington and City of London Corporation have submitted plans to build a new school and flats on the edge of the Golden Lane estate in central London.

The two authorities are looking to turn a disused school and adult learning centre site on the corner of Golden Lane and Baltic Lane near the Barbican into a 14-storey residential block and a new three-storey primary school and sports hall.

Members of the Golden Lane Residents Association have previously said they fear the scheme could have a damaging impact on nearby grade II-listed Great Arthur House, which is the estate’s most visible landmark.

The planning application for the scheme contains four fewer flats than the 70 mentioned during the pre-application consultation, but residents believe the Hawkins Brown-designed proposals still represent over-development and are not sympathetic enough to the existing estate.

Pre-application advice from Historic England said that the impact of any tower included in the proposals on 16-storey Great Arthur House would have a “critical” bearing on the acceptability of the scheme.

“The design quality, materials and delivery of this would be crucial and in particular, the detailing at roof level where the new building would need to have a positive but deferential relationship with the rooftop garden and canopy of Great Arthur House,” it said.

“Exceeding the height of the listed tower would require a high level of justification and require further scrutiny to assess its acceptability in principle.”

The government heritage adviser added the impact of the proposals on other parts of the estate – some elements of which are grade II* listed needed to be “fully explored”, as did their relationship to the neighbouring St Luke’s Conservation Area.

Members of Golden Lane Residents Association held a meeting to discuss the plans last week. Group member Clem Cecil said: “The overwhelming consensus is that they are trying to cram too much on to a small ground.”

“The other point that we are coming back to over and over again is that Golden Lane Estate is a unique and significant example of postwar social housing – representing a peak in design quality.

“The estate is run down and neglected – this is going to significantly damage its setting at a time when we should be in fact investing in repairing it and improving it.”

The proposals are open to public consultation until the end of August.