Hospital was being built by bust contractor Carillion

The Royal Liverpool Hospital, left unfinished after Carillion’s collapse, will now not open until at least 2022.

And Steve Warburton, chief executive of Liverpool Hospitals, said the scheme will need an additional £300m more to fix defects on site, almost doubling the overall cost of the scheme. 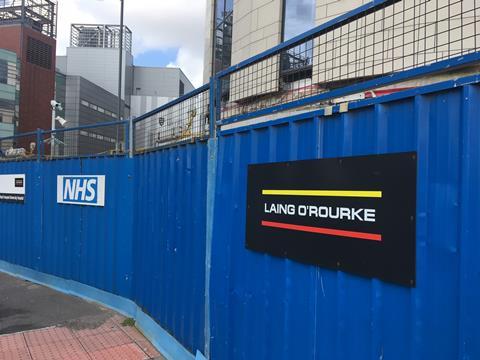 Laing O’Rourke has been drafted in to finish the job

The £335m scheme, which was originally due to complete in 2017, was being built by Carillion when the firm collapsed in January last year forcing work on site to grind to a halt.

Steve Warburton, Chief Executive of @LivHospitals is giving an update on the delays to the new Royal. He says the work to complete it will cost £300 million and they are likely to be at the existing hospital for the next three winters, opening in 2022. pic.twitter.com/K8UXvHPNR2

A review carried out by Arup after the firm’s implosion found major cladding and structural issues at the new hospital.

The cladding fitted did not meet building regulations while cracks were found in several structural beams.

Last month Liverpool University Hospital NHS Foundation Trust admitted it was still working to find out how to rectify the cladding problem.

A progress report sent to it by project manager Gleeds said work “was progressing well, although a solution for the external cladding is still being worked through with specialist advisors”.

The trust has not yet finalised the hospital’s business case for the additional work on the hospital.

Gleeds was drafted in to project manage the scheme in January this year, while Laing O’Rourke has replaced Carillion as main contractor on the job.