The £90m job will deliver both student accommodation and academic spaces 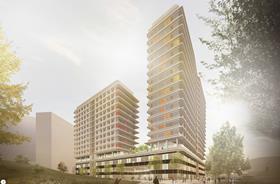 University College London has begun the search for a contractor for a £90m job on its new Stratford campus.

The Pool Street West project (pictured), is part of the first phase of UCL East and will deliver a mix of student accommodation and academic spaces at the former Olympic Park in east London.

The university is on the hunt for a design and build contractor to deliver the Lifschutz Davidson Sandilands-project.

Pool Street West will be made up of two residential towers of 16 and 20 storeys which will provide 524 student accommodation rooms.

The podium of the building will provide almost 5,500m2 of academic space and research labs.

Contractors have until 19 July to register their interest, with a shortlist of no more than six bidders to be invited to tender by 17 August.

It is the second job on the university’s new campus in London’s east to be put out to tender, following on from Marshgate I.

In March Building revealed five firms including Laing O’Rourke and Sir Robert McAlpine had been shortlisted for the £200m contract to build the 35,000m2 research, innovation and teaching building

The pair were joined on the shortlist by Lendlease, Mace and Bouygues. An appointment is due to be made in the coming weeks.

Work on the Stanton Williams-designed building is expected to start next summer.

UCL East, which is being built close to Zaha Hadid’s aquatics centre, is part of the wider transformation of the Queen Elizabeth Olympic Park.

Earlier this month it was confirmed that Mace would manage the arts and culture precinct of the Olympic Park redevelopment, which has been designed by Allies & Morrison, O’Donnell & Tuomey and Arquitecturia.

At the launch of new plans for the precinct London mayor Sadiq Khan confirmed the BBC was the latest high-profile tenant to take up space in the scheme previously known as Olympicopolis.

Now called East Bank, as well as the broadcaster the precinct will become home to the V&A East museum, Sadler’s Wells East theatre, a new campus for the London College of Fashion.