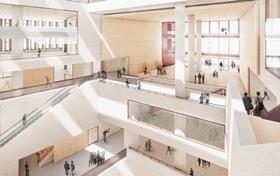 The race to land the first building for a new university campus in east London has narrowed to two firms.

Mace and Laing O’Rourke are understood to be the final pair left in the ring for the prized deal for UCL in Stratford.

The pair declined to comment but a UCL spokesperson confirmed the contest had gone down to two firms from the original five with a winner for the £200m deal due to be announced in the coming weeks.

Rival bidders Lendlease, which is working on the International Quarter London business district in Stratford, Sir Robert McAlpine and Bouygues are all believed to be now out of the running.

Called Marshgate I (pictured), the building has been designed by Stanton Williams, a former Stirling Prize winner, and will be a new 35,000m2 research, innovation and teaching building. Construction is expected to start by next summer.

Marshgate I is part of the first phase of the university’s wider UCL East campus project which is being built to ease the pressure on space at its central London site in Bloomsbury.

UCL has also begun the search for a contractor for the first phase’s second building, Pool Street West, with shortlisted bidders expected to be notified in the coming weeks.

The university is on the hunt for a design and build contractor to deliver the Lifschutz Davidson Sandilands-project, which will provide a mix of student accommodation and academic space.

UCL East, which is being built close to Zaha Hadid’s aquatics centre, is part of the wider Stratford regeneration and neighbours the East Bank cultural and arts project, which has previously been known as Stratford Waterfront and Olympicopolis.

The section of the project being built for Sadler’s Wells theatre, the London College of Fashion, the BBC and the V&A museum is being designed by Allies & Morrison, O’Donnell & Tuomey and Arquitecturia. Mace is set to project manage the construction of the arts and culture precinct.