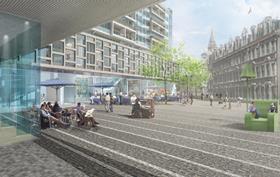 Sir Robert McAlpine is eyeing a hat-trick of big London contract wins after becoming the hot favourite to win the contract for the £350m revamp of the iconic Centre Point building.

The firm is favourite to win the contract for developer Almacantar’s £350m redevelopment of the iconic Centre Point, after it was brought in to do pre-development work.

Mike Hussey, chief executive of Almacantar, said the appointment did not guarantee the contractor the main contruction job, but if “everything goes to plan”, then the job would be confirmed.

The scheme, designed by Rick Mather Architects and Conran & Partners, will see 82 luxury flats housed at the top of the skyscraper, along with a full redevelopment of the ground floor.

As Building first revealed this week, Sir Robert McAlpine has also been confirmed as the main contractor for the £750m development on the site of the former Middlesex Hospital. The Fitzrovia-based project – being developed by Exemplar Properties – has been designed by architects Sheppard Robson and Lifschutz Davidson Sandilands and won planning in February.

Sir Robert McAlpine has won the contract – estimated to be worth up to £160m – after beating off competition from Laing O’Rourke. 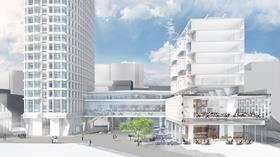 Under plans drawn up by architecture practice Stanton Williams, the project will involve the redevelopment of the former Government Office for London building into 120 residential apartments with a restaurant and art gallery.

The Middlesex Hospital is one of the largest sites in central London and was once part-owned by the Candy brothers, who dubbed their proposed development “NoHo Square”. Under the new plan, the brownfield site will become a mixed-use community, centred around two buildings and a landscaped public square containing a listed hospital chapel.