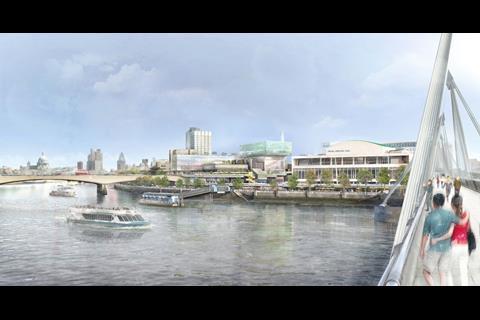 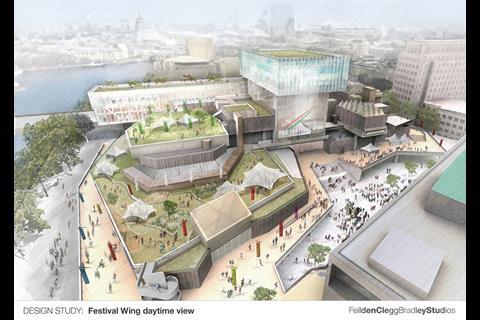 The proposals would include the refurbishment and renewal of the 1960s buildings that make up the Festival Wing – Queen Elizabeth Hall, Purcell Room and Hayward Gallery – and the creation of a new glass pavilion, a new central foyer and a new liner building.

The Southbank Centre said the proposals would provide “more art for more people in better spaces”.

Alan Bishop, chief executive of Southbank Centre, said: “Feilden Clegg Bradley Studios have magnificently responded to our vision for this part of the site with a design that refurbishes and maximises the potential of the Queen Elizabeth Hall, Purcell Room and Hayward Gallery, while also creating major new glazed spaces that contrast with and complement the existing buildings.

“Having successfully delivered the wonderful transformation of the Royal Festival Hall in 2007, we are in an excellent position to deliver these plans and we are extremely grateful to the Arts Council England, which has enabled us to embark on this project following the successful first-stage application for £20 million of capital funding in March 2012.”

Jude Kelly, artistic director of Southbank Centre, said: “We have a vision for the whole site to capture the unique inspiration of the Festival of Britain and build on the great success of our year long festival programmes.

“We’re thrilled with the plans we’re unveiling, which reflect our aspiration to give millions of people a new relationship with this extraordinary historic site and provide them with further opportunities to get involved in the arts and culture.”

Peter Clegg, Feilden Clegg Bradley Studios, said: “We are delighted to have the opportunity to work with the Southbank Centre team to realise their vision of the Festival site at the heart of the city.

“It is a real honour to be working on one of the most significant, radical and challenging works of architecture from the 1960s.”

Dennis Crompton, one of the original architects involved in the design of the Hayward Gallery, said: “I remember my excitement when, in 1960, I was invited to join the team of architects at the LCC, who were working on the design of the proposed new concert hall and art gallery on the South Bank.

“The following year, when the project had its public launch, one member of the group expressed our ambition that there should be other facilities on the South Bank ‘so that it becomes alive … rather than just a cultural centre’.

“Some seven or eight years later I again experienced excitement when the complex opened and I was able to wander from the riverside walk, over the walkways and terraces and through (and over!) the buildings – but there was something still missing.

“This feeling persisted for over 40 years until a warm Spring day – 22 April 2011 to be exact – when I revisited South Bank, found it teaming with people, children and adults, some relaxing on a newly-installed grassy lawn on the top of the Queen Elizabeth Hall Roof and others dodging through the fountain on the terrace below. Activity everywhere. So many people just enjoying themselves.

“I felt that old excitement return. Looking at the proposals for the future I have the hope that this welcome, and much overdue, liveliness will be amplified and extended to other less clement times of the year and that perhaps the new buildings will themselves reflect the animation of the public presence.”