10
Specialists’ Personality of the Year
News

Specialists’ Personality of the Year 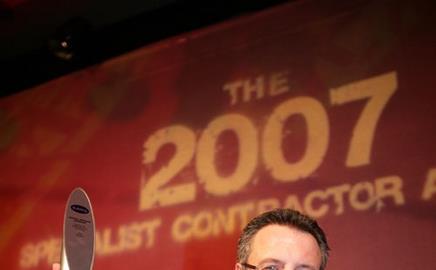 The winner of the 2007 Specialists' Personality of the Year is Brendan Kerr, group managing director of Keltbray.

Despite recent technological advances, construction is still a "people industry". One in which individual personalities can, and often do, make a difference to the success of a company or project. Brendan Kerr is one of those individuals.

Clients point to his infectious personality, his vigor and the positive "can do" attitude he brings to projects. They also praise his innovation when it comes to tackling problems on site. Others say his skill is that he simply enjoys people and what he calls "the craic".

A carpenter by trade, our winner arrived in the UK from his native Belfast just over twenty years ago. After a few years spent working as a site manager with various firms, he began working as contract manager with the firm he now owns.

He then set about diversifying the company's skill base beyond the narrow realm he inherited. His success is evidenced by a quadrupling of both company turnover and operating profits in the last four years.

And his company is now the first and often sole port of call for clients that require the full range of front end services. You even could say, he has made front end work glamorous.

He was recently ranked 35 in the list of Britain's top 100 entrepreneurs by ManagementToday in 2007. In fact he was one of only three construction executives that made the top 50.

Away from the office, this year's recipient devotes part of his time and energy to raising money to help the children of AIDS sufferers, and children afflicted with the illness.

Under his leadership his company has also become the first contractor to win Building's coveted specialist contractor of the year twice in 2004 and this year.