3
Cladding Specialist of the Year
News

Cladding Specialist of the Year 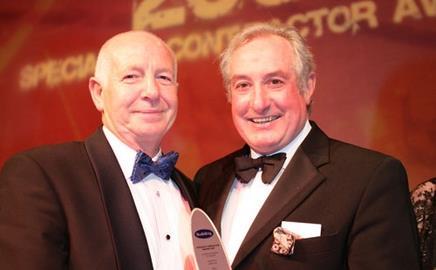 Excellence in off-site manufacture of innovative cladding systems has won Prater the confidence of key clients such as Bovis Lend Lease and Stanhope. In tight environments, where speed of installation is crucial, its pre-assembled wall-solutions have allowed other trades more time to perform their work – small wonder it’s won long-term friends and partnerships in high places. Highlight of the year was its role in a £9million housing redevelopment at White City, London for Octavia Housing, where over 5,000m2 of Ruukki wall elements were designed and manufactured off site and delivered on a just-in-time basis.

As you’d expect, sustainability in construction is a big issue for Prater and it uses only FFC and PEFC timber. At its White City project, it pushed for a change in spec from standard board to an HFA free, Dow SLA insulation board – far more environmentally friendly. A runner up at last year’s awards, Prater’s order books rose 18% this past 12 months and profits nearly doubled.

With over 160 years’ experience of designing and installing sunscreening systems behind it, Levolux continues to push the boundaries of bespoke design and service in all types of buildings. By keeping air-conditioning costs down, stopping buildings from heating up and providing aesthetically pleasing structures, Levolux has proved an indispensable member of the design team on numerous high-profile projects including Chiswick Park, where it produced both the world’s largest single piece extruded louver (9.5m) and the UK’s largest perforated louver (10m).

In just five years, MPG has hit £25 million of sales by offering integrated approaches to the whole façade. And at Queen Mary’s University Campus in East London this year, it broke the mould by undertaking all the internal finishes as well as the external cladding. That was a particularly challenging job as the entire outer face was constructed from Brazilian Andira Hardwood and cutting the individual planks required breathing apparatus for operatives. All in a day’s work for one of Laing O’Rourke’s favourite specialists.

With increasingly shorter lead times, the need for innovation has never been greater and Alumet has made its name with original and effective façade solutions. The ABLE façade system is one example, an enhanced demountable walling system capable of withstanding a terrorist bomb blast, which has satisfied Home Office and MoD criteria. Its adaptability means 85% of sales now come through negotiated contracts.

Just pipped for a second-year running, Lakesmere impressed clients across a range of sectors this year but the job that stands out was its cladding work at the O2 Arena. The design and installation process was, to say the least, challenging: the new Kalzip XT system had to be used to create a twisted corkscrew effect, where the pitch of the Kalzip changed by 22 degrees over the length of 45m. Needless to say, the new Arena opened on time and the bands played happily on.

One of the industry’s longest-established specialists, Szerelmey continues to impress with its approach to stonework and restoration contracts, using a wide variety of materials. The Drake Circus job for Bovis Lend Lease won it that company’s best-performing package contractor award. Health and safety awards have also been heaped upon it for its excellent low-incident statistics.