7
Sustainable Project of the Year (over £2m)
News

Sustainable Project of the Year (over £2m) 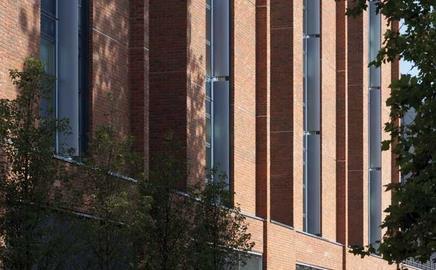 A Bennetts Associates project that established a new standard for urban refurbishment scooped this prize. Sponsored by Faithful + Gould

Reusing existing buildings is going to become very popular, and this project by Bennetts Associates shows just what can be achieved. It took a sixties gas-guzzling concrete eyesore and turned it into one of the UK’s most energy-efficient offices. It also pioneered an inventive form of natural ventilation, despite being located next to noisy, polluted roads. It did this using a carefully engineered, wind-driven system that does not require the opening of windows. The building has an emissions target of 39kgCO2/m2/year, which compares to a new mechanically ventilated building (the default low energy urban solution) of 55-60kgCO2/m2/year.

The judges wanted to commend the team behind Ropemaker. From the outset, British Land’s brief was to develop a commercial City office building with serious green credentials. The building uses a mix of strategies including a tilted double-glazed facade that cuts solar gain, renewable energy for hot water and space heating, free cooling for the air-conditioning systems and water efficient devices that save 5.4 million litres of mains water each year. The project was entered by British Land

Five years work by the client and design team has resulted in one of the most sustainable schools in the UK. Arup worked closely with architect Gaia to implement the design, which includes an envelope that is so well detailed that it achieves an air leakage rate one fortieth that required by Building Regulations. This means that the building can effectively heat itself from its the occupants’ body heat and should result in emissions of 8.2kg CO2/m2, 20kg less that a than a typical school.

This is a speculative office development alongside the Thames that set itself the goal of a BREEAM “excellent” rating. Many innovative features were incorporated, including high-performance solar interactive triple-skin facades, motorised timber louvres that track the sun for solar shading and 2000m2 of sedum roofs for biodiversity. Energy use estimates are half those of current benchmark office buildings. Entered by Sir Robert McAlpine

This Zero Emissions Building Renewing Alnwick is a replacement office for the Department for the Environment on the outskirts of Alnwick, Northumberland that aims to generate enough energy from carbon-free sources to counter the emissions from electricity and gas used in the building. It uses natural ventilation, solar shading combined with photovoltaic arrays, wind turbines and a biomass boiler to help it achieve this. Entered by Frederick Gibberd Partnership.

Gazeley’s logistics centre breaks new ground both by being a carbon positive development and the first building to achieve an “outstanding” rating under BREEAM’s 2008 regulations (at design stage). It showcases the latest environmental techniques including electro-kinetic road plates, which generate electricity from vehicles entering the site, and photo-voltaic panels mounted within ETFE roof lights.

The design team set out to create a landmark building with this library and civic offices. What Crawley got was a larger more accessible building with better facilities that also exceeds the requirements of Part L of the Building Regulations by 52%. It did this through meticulous design that offset a quarter of the building’s carbon emissions by the use of renewable technologies. This scheme was entered by Penoyre & Prasad and Gifford.

Sainsbury’s Dartmouth was designed to reduce both its operational and embodied carbon – 30% of its energy is from renewable sources, which reduce its overall carbon emissions by 54%. It also acted as a test bed for the technologies installed. As a result, 80% of the initiatives used are now standard specification in new Sainsbury’s stores, and are assessed for use in extension and refurbishment projects.