5
Sustainable Project of the Year (under £2m)
News

Sustainable Project of the Year (under £2m) 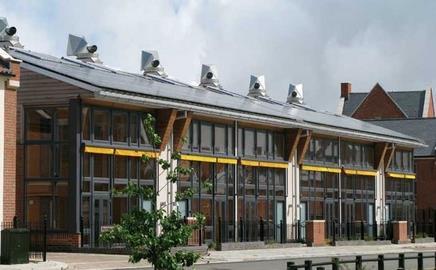 The latest project from Bill Dunster – houses that meet level six of the Code for Sustainable Homes – came top this year. Sponsored by Keepmoat

These ZEDfactory homes are the first to be completed and certified to level six of the Code for Sustainable Homes, and all their energy consumption is balanced out by microgeneration integrated into the buildings. It’s constructed using ZEDfactory’s RuralZED system which was pioneered by architect Bill Dunster and uses a low embodied energy glulam frame to support thermally massive walls and floors. A sunspace is used as a thermal buffer zone, allowing the buildings to capture warmth from the sun in the winter months as well as providing additional amenity space. Electrical consumption has been minimised by using large windows to provide natural light, and a 3.2kW array of photovoltaics provides enough electricity to exceed the entire electrical load of each building over a year.

This project, which was entered by Acme, is an extension to a 19th-century mill keeper’s house, combined with a new flood defence and landscaping. The extensions is deliberately low tech, relying on passive design measures to minimise energy requirements. The structure is made from laminated wood, exposed on the inside and clad in charred cedar boards externally. As part of the project, a new flood defence has been completed around the back of the mill, making it possible to abandon all downstream defences, and return 25ha of forest and grassland to their natural state as marsh.

Straw bales, lime render and timber were used to build this eco-centre, which is part of a regeneration scheme for the local canal corridor. It was procured by British Waterways on behalf of Stoke council which has leased it to Staffordshire Wildlife Trust. The building’s structure is designed to minimise embodied carbon and energy use and the centre makes the most of its location with heating provided by a water-source heat pump with 600m of pipework in the bottom of the lake, and renewables deliver 47% of the building’s energy needs. The scheme was entered by Arup and Walker Simpson Architects.

The refurbishment of a Victorian terrace house within a conservation area in Hackney, east London, might sound unremarkable – until you learn that the aim was to reduce primary energy use by 80%. This target represents the overall carbon reduction that the UK hopes to make by 2050. As well as enlarging the living, cooking and eating areas to suit contemporary life, the scheme includes technical innovations to increase insulation and reduce thermal bridging, and integrates mechanical ventilation with heat recovery and triple-glazed windows. The project will be monitored in occupation to assess its success. It was entered by Prewett Bizley Architects.

Planet House is unusual in that it demonstrates what can be achieved by a small not-for-profit organisation with a limited budget acting as client, designer and contractor. Energy Solutions (North West London) is a local energy advice and consultancy organisation. For years the firm had been looking for the opportunity to put its principles into practice by creating its own zero-carbon offices and it finally did so with this project, which makes use of reclaimed materials, such as timber flooring and doors and a CHP plant run on cooking oil. The entire project was delivered within a budget of about £100,000 (less than £500/m2). It was entered by Energy Solutions (North West London).

Tackling our existing housing stock is the key to meeting the government’s carbon reduction targets, and this prompted United House to develop a low carbon refurbishment method that incorporates the improvements that give the biggest cuts in household bills. Its approach was tested on a ground-floor flat in a Victorian terrace in Islington with solid walls and sash windows. A total of 24 improvements were made, including the installation of a micro-CHP system. Total carbon emissions were reduced 70%.