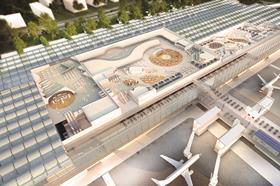 Manchester airport will double in capacity over 10 years

Aecom, Mouchel and WSP Parsons Brinckerhoff are the big winners on a £250m framework to deliver transport projects in the Liverpool city region.

Merseytravel, the transport agency for the Liverpool city region, has awarded more than 100 firms places across 14 lots on the four-year framework, covering areas such as rail, tunnels and highways infrastructure.

The Merseytravel Consultancy Services Multi-Party Framework Agreement will also be used directly by the six local authorities that make up the Liverpool City Region Combined Authority.

Last week’s Queen’s Speech detailed a raft of proposed legislation to boost the regions, including a devolution bill that could see powers over transport, economic development and regeneration rolled out to city regions across the country, beginning withManchester.

The University of Manchester this week appointed Balfour Beatty, Laing O’Rourke and Sir Robert McAlpine to a framework to deliver the bulk of its £1bn campus masterplan.

The three contractors will deliver the majority of the university’s projects over the next eight years, including its £350m flagship Manchester Engineering Campus Development (MECD).

The programme, which could begin as early as April 2016, will see Terminal 2 become the airport’s main terminal and Terminal 3 improved to cater for more passengers.

Commenting on the University of Manchester framework, Diana Hampson, the university’s director of estates and facilities, said the construction partnering framework was vital for ensuring quality and value in delivery of the masterplan, because “the scope
and scale of the campus masterplan requires a huge amount of resource and presents significant delivery challenges.”

Jon Adams, managing director for northern major projects at Balfour Beatty, said the firm’s capabilities enabled it “to meet the demands of this framework which will provide an improved built environment for the 40,000 students the university serves”.
Chancellor George Osborne said Manchester Airport Group’s plan was a “massive vote of confidence” for the north of England and in building a northern powerhouse.