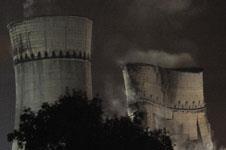 Two landmark cooling towers in South Yorkshire were demolished at the weekend, despite a campaign to preserve them.

The 70-year-old concrete structures, by the Tinsley viaduct, near Sheffield, were brought down by power company E.ON in a controlled explosion at 3am on Sunday.

More than a thousand people turned up to watch the 250ft towers collapse.

Protesters had campaigned to preserve the structures, which were the last remnants of the Blackburn Meadows power station. But E.ON said they had deteriorated and maintenance work would be too expensive.