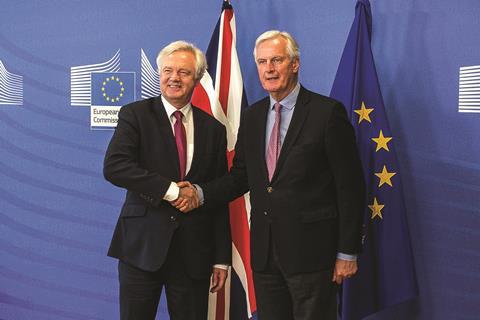 Construction’s most powerful trade associations have joined forces to fire a warning to Brexit secretary David Davis that the industry will not be able to meet the government’s housing and infrastructure targets without “ongoing access to EU workers”.

News of the joint letter from nine of the sector’s biggest organisations emerged as industry leaders reacted with shock to the draft EU immigration strategy leaked last week.

The proposed measures include for those in “high-skilled occupations” to be granted permits to work for a period of three to five years, while other EU migrant workers will be offered a maximum of only two years.

Liberal Democrat former building regulations minister Lord Stunell said it would leave the industry “in serious trouble”, while former chancellor George Osborne told Building “new projects [might not] go ahead because people are uncertain about arrangements with Europe and its future”.

The letter to Davis (available to read as a PDF at the end of this story) was signed by the chief executives of bodies that included Build UK, the Construction Industry Council, the Home Builders Federation (HBF) and the Federation of Master Builders (FMB), and was sent at the start of August, before the migration strategy leak. It pointed out that construction accounted for 10% of total UK employment, but that EU citizens accounted for 8% of construction workers, and 27% of workers in London.

It said: “Given the extent of current skills gaps in our industry and record high employment levels, it will not be possible to recruit the people our sector needs without ongoing access to EU workers.

“If the UK’s post-Brexit immigration system fails to recognise and take account of this, then the strength of our economy and the delivery of the government’s ambitious targets for new housing and infrastructure will be undermined.”

The letter called for transitional arrangements, during which EU workers would still be able to work in the UK, and for minimal bureaucracy so the many small construction employers could cope.

While it said the industry knew it needed to do more to train UK employees in the long term, it added: “It is important to underline at this early stage the level of concern there is in the industry about this issue and the potential negative impact on future growth and delivery if we get this wrong.”

Brian Berry, chief executive of the FMB, said in response to the leaked migration strategy: “This leak seems to show the government is still not getting it. Construction will be dependent upon semi-skilled workers; it will be vital. We thought they’d be listening more.”

John Slaughter, public affairs director at the HBF, said the leaked strategy was “particularly worrying for the ability to recruit and retain the workers we need”.

Lord Stunell added: “The reduction in capacity this implies would be really damaging for the industry. It clearly undermines the capacity to deliver big-picture projects wanted by government.”

Architect Norman Foster used his chairman’s statement in the company’s latest report and accounts to warn that London’s ability to attract overseas staff was already being hit by Brexit. “London is a melting pot for international expertise and needs to maintain that edge. It is already under threat.”

A government spokesperson said it would be setting out its proposals for a new immigration system later this autumn.

Click on the PDF below to read the full letter to David Davis MP.